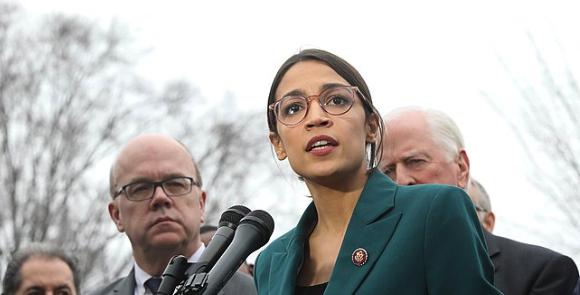 Last week, an enterprising conservative political consultant unearthed evidence that Rep. Alexandria Ocasio-Cortez (D-N.Y.) may have hired her boyfriend, Riley Roberts, to work in Congress. This news actually unraveled a far bigger story of corruption, however. As it turns out, a political group helping Ocasio-Cortez's campaign had already paid Roberts during the campaign — and those payments from that shady organization may be the reason Ocasio-Cortez is in Congress today.

On Wednesday, Luke Thompson, a podcast host and former staffer for the National Republican Senatorial Committee (NRSC), shared some damning research into Ocasio-Cortez's campaign. He discovered more about the relationship between Riley Roberts and the campaign, but he also unearthed a humongous corruption story.

Luke Thompson had originally unearthed the central piece of evidence tying Ocasio-Cortez's congressional office to Riley Roberts — her boyfriend's official congressional staff email. In the wake of this news, some people noticed that the Ocasio-Cortez campaign paid Roberts $1,750, but Thompson insisted this was only "a means of keeping accounting in order." During the first half of 2018, the boyfriend volunteered with the campaign, and his efforts were classified as an in-kind contribution. This is normal.

Two far more conspicuous payments to Roberts came in 2017, however. Those involved Brand New Congress, an organization founded and run by Saikat Chakrabarti, who happens to be Ocasio-Cortez's chief of staff.

Chakrabarti founded Brand New Congress in 2017. "It’s a rather ingenious organization, but one that dwells in a legal gray-area as far as campaign finance law is concerned," Luke Thompson reported. "It facilitates campaigns on shoestring budgets by providing a single clearinghouse for campaign services, generally filed under the banner of 'strategic consulting'. But, as a result, it limits the meaningfulness of FEC disclosures by those campaigns," and it means that Brand New Congress "spends most of its budget on overhead and makes relatively few actual contributions to candidates."