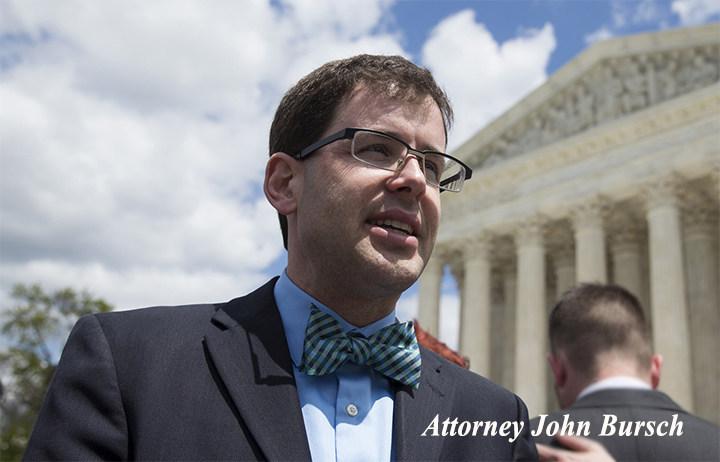 The Thomas More Law Center was retained by the Tennessee General Assembly in March 2017 to file a first-of-its-kind Tenth Amendment lawsuit challenging the constitutionality of the federal refugee resettlement program. The federal government has violated state sovereignty by forcing Tennessee to continue paying for the program after Tennesseeopted out and exercised its right not to participate.  TMLC is appealing after a federal district court judge dismissed the case. The Law Center is representing Tennessee without charge.

Mr. Bursch, a former Michigan state solicitor general and past chair of the American Bar Association's Council of Appellate Lawyers, has an impressive client list ranging from Fortune 500 companies and foreign and domestic governments, to top public officials and industry associations in high-profile cases. His cases frequently involve pressing political and social issues, and five had at least $1 billion at stake.

He has argued 11 U.S. Supreme Court cases and obtained summary reversal on three more, compiling a Supreme Court merits record of 10-2-2.  He has also argued 30 cases in state supreme courts, and dozens more in federal and state appellate courts across the country. A recent study included John on its "veritable who's who of Supreme Court litigators" list.

Richard Thompson, TMLC President and Chief Counsel, commented:  "John's integrity, outstanding litigation skills, and impressive record on appeals prompted me to ask him to join our fight.  I can't think of anyone more qualified to represent Tennessee and the constitutional principles involved in this case."

Donna Eyman I am thrilled that TN has the common sense sadly lacking in today's world to actually stand for Constitutional principles. I will pray for the positive decision on the case.

3-Mar-2021
Tennessee: An All-Volunteer Force for Common Sense 2-Mar-2021
Justice of the peace and three others arrested on 150 counts of voter fraud in Texas 1-Mar-2021
Watch: Video surfaces of young child being led through his “Gay BCs”

3-Mar-2021
Tennessee: An All-Volunteer Force for Common Sense 2-Mar-2021
Justice of the peace and three others arrested on 150 counts of voter fraud in Texas 1-Mar-2021
Watch: Video surfaces of young child being led through his “Gay BCs”