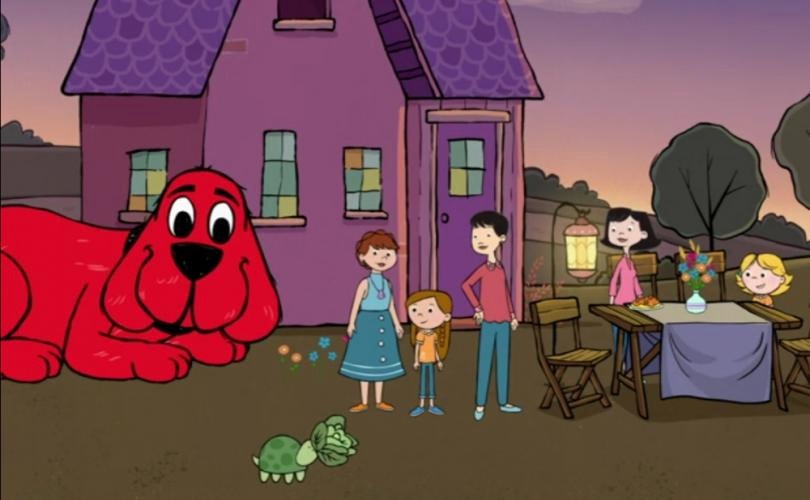 PBS KIDS should not introduce the LGBTQ lifestyle to young children.'

February 28, 2020 (LifeSiteNews) – After a seventeen-year production hiatus, PBS has rebooted its enduring favorite, Clifford the Big Red Dog, but with one jarring change: The series now features a child with two lesbian “moms.”

In the episode where the lesbian characters are introduced, “The Big Red Tomato/Dogbot,” the women are not identified as overtly lesbian, but in subsequent installments, the two are both called “Mom” by Samantha, the new friend of Emily Elizabeth, who remains the central character in the show along with her loveable gigantic red dog, Clifford.

One Million Moms (1MM) director, Monica Cole, sent out a call to action to the organization’s followers headlined, “PBS KIDS is Taking Advantage of Parental Trust,” which slammed PBS for allowing a continuing infiltration of LGBT characters, personalities, and themes.

In the widely circulated missive, Cole pointed out to her readers that this is part of a trend toward LGBT indoctrination at the formerly child-and-family-safe network:

Apparently featuring a same-sex wedding between two males on the children's animated series Arthur wasn't enough for those who are pro-LGBTQ at PBS KIDS. That happened nine months ago.

And if a same-sex wedding and a same-sex relationship in children’s programming weren’t enough, PBS recently announced that Sesame Street will feature a drag queen activist wearing a gender-bender tuxedo gown in one of its episodes this year. Sesame Street posted on its Facebook page: “Billy Porter bringing those fierce vibes to Sesame Street. #Season51” The post also included a fire emoji which is used to signify that something is cool, awesome, exciting, or “on fire.” It can also convey that someone is sexy or hot.

Discussion of such controversial topics and lifestyle choices should be left up to parents. PBS KIDS should not introduce the LGBTQ lifestyle to young children. PBS KIDS should stick to entertaining and providing family friendly programming, instead of pushing an agenda.

Clifford the Big Red Dog is based on Scholastic Books’ best selling series by Norman Bridwell, which debuted in 1963.  The animated PBS program based on the series originally aired on from 2002 to 2003 and was broadcast in 110 countries.

One of Cole’s complaints was that there was no disclaimer at the beginning of the episode alerting parents that a lesbian relationship was about to be introduced to the show’s very young viewers.

Last year, the PBS series, Arthur, began its twenty-second season with the surprise “marriage” of Arthur the aardvark’s teacher Mr. Ratburn to another man.

In the episode, Arthur and his classmates were intrigued to discover that their teacher is getting married and begin to investigate who his bride might be. When the children arrive at the ceremony, they discover that Mr. Ratburn doesn’t have a bride. Instead, he walks down the aisle of the wedding tent on the arm of a male aardvark named Patrick.

Porter will appear during the 51st season of the beloved children’s show, according to Sesame Street’s official Facebook page.

In June 2017, nowadays referred to as “Pride Month,” Sesame Street tweeted an image of the show’s biggest celebrity character, Elmo, next to his multi-colored Muppet friends – a clear tribute to the "Gay Pride" rainbow flag.

The Tweet declared, “Sesame Street is proud to support families of all shapes, sizes, and colors.”

Sesame Street is proud to support families of all shapes, sizes, and colors.

52.4K people are talking about this

Later that year, its song “Anyone Can Play” purported to smash gender norms for children’s toys and costumes, including the lyrics “some boys like to play dolls” while the male character Grover is seen in a purple dress.

“Many families have already discovered that PBS KIDS, largely supported by federal funds, is anything but family friendly,” said Cole at the conclusion of her letter. “However, 1MM is warning anyone who continues to watch the channel.”