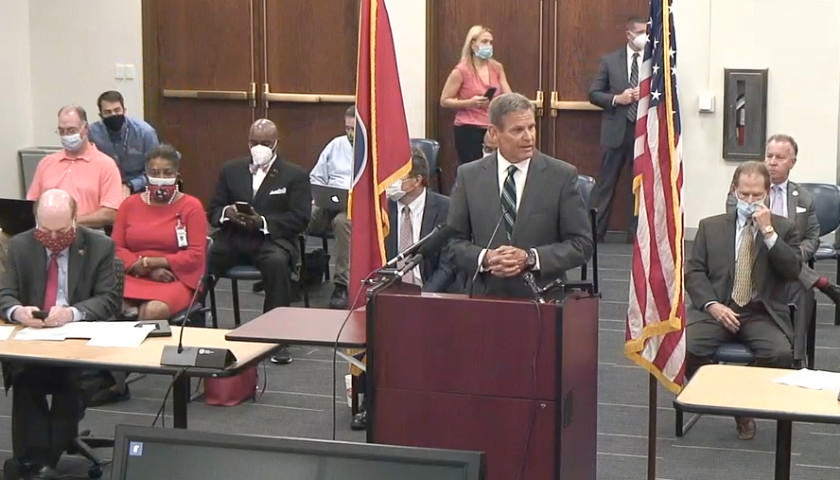 After Governor Bill Lee weighed in on the State Capitol Commission (SCC) vote regarding the removal of the Nathan Bedford Forrest bust from the second floor of the State Capitol, by a 9 to 2 vote the body complied with his request.

The original motion of removing just the bust of Nathan Bedford Forrest was amended to include the monuments to two of Tennessee’s other military heroes, Admirals David Farragut and Albert Gleaves.

Lee issued remarks the day before the SCC meeting, The Tennessee Star reported, saying that the meeting has been more than a year in the making as appointments have been made to the SCC.

Lee then attended the Thursday meeting, making opening remarks and staying for a good portion of the three-hour meeting that he reportedly called.

Of the 12-member SCC, there is currently one vacancy from the State’s Historical Commission.

More than half of the remainder of the SCC’s membership are Lee’s appointees, either by virtue of their position in his cabinet, or the three citizens representing each of the state’s grand divisions.

Once Lee finished his opening remarks, members of the General Assembly who had asked to speak also made comments.

Gilmore gave an emotional plea, causing her to pause about midway through her remarks when she said that tears come to her eyes every time she gets off the elevator and looks at the Forrest bust.

She questioned why some people do not see Black people as humans and said that, while there is a tremendous amount of work to be done, removing the Forrest bust will make one small step to correct a mistake made in 1978, which was actually the result of Democrat Senator Doug Henry’s 1973 resolution.

Comparing the removal of the bust to the doom and gloom predictions associated with women’s suffrage, Love said, “I promise you, the world will not end, mountains will not fall into the sea, and the rivers will not dry up.”

As a veteran, Stewart said the military record of Nathan Bedford Forrest had to be looked at.  Forrest’s alleged actions at Fort Pillow, he said, would disqualify him from a place of honor.

Asking the Commission to do the right thing, Hardaway in his nearly 15 minutes of commentary referenced the protesters outside the meeting room, who could be heard shouting through the closed doors of the meeting room, demanded to have a seat at the table that was not set for them.

The agenda, however, failed to mention a physical location for the meeting, providing only a link to a WebEx livestream.

SCC Chairman Butch Eley later said the restrictions on attendees in the room was because of the ongoing COVID-19 situation.

Hardaway asked for consideration as to how disrespectful and insensitive it is for all of the African-American legislators to endure walking past the statue every day when they go to make law for the six million Tennesseans without regard for their gender, race, creed or color.

Senator Joey Hensley (R-Hohenwald) is a member of the Sons of Confederate Veterans and talked about the suffering and terrible times during and after the Civil War, having three great grandfathers who served in the Confederacy.

He refuted the then-fake news about the battle known as the Fort Pillow massacre of 200 mostly Black Union soldiers that had surrendered. “That’s just not true.  It was a terrible battle, but they had not surrendered,” he said.

Hensley expressed that Tennessee should be a leader by keeping the bust in its location and showing that historical figures should be judged in the context of the times.

Representative Mike Sparks (R-Smyrna) largely addressed his comments to Lee and his fellow members of the General Assembly, drawing them into his weaving but interrelated thoughts.

He briefly touched on an incident where Forrest was called upon to defend the husbands, brothers and sons of crying women he encountered.  The men were being held in a courthouse, which sits near Sparks’ district, going to be executed by Union forces.  Forrest, at the time was riding with dozens of Black troops, which Sparks called remarkable.

In attending a protest at Middle Tennessee State University, Sparks said he asked the students four questions.  As he again asked the questions during the meeting, with almost no one knowing the answers he gave to his own questions.

Who was Samson Keeble?  Besides having a bust on the second floor of the State Capitol, Sparks schooled that Keeble was a Confederate soldier who was a Republican who became the first African-American state representative.

To the question of who is John Newton, Sparks got no response and advised that he was a slave ship captain who wrote the hymn Amazing Grace as a story of redemption.

Continuing on the theme, Sparks said that the governor and secretary of state know that William Wilberforce freed the slaves in Great Britain, suffering persecution for it.

And, as to the question of who had the most African Americans at their funeral, Sparks said that Nathan Bedford Forrest had 3,000 to 5,000 in attendance.

Sparks talked about the 1875 Independent Order of Pole-Bearers Association event in Memphis with thousands of African Americans in attendance to which Forrest was asked to speak, “with some jeers of white folks who think I’m doing wrong.”

He talked about the oppression that is going on in the state right now, turning around to ask Democrat legislators directly if they knew that payday loans unfairly target minorities especially single females at a rate five times higher than any other group.

Once the legislators concluded their comments after about an hour, comments from eight citizens primarily through via video conferencing were limited to three minutes each.

Eley, who is also Lee’s appointee as the Commissioner of Finance & Administration, made the formal motion for a petition for a waiver to the Tennessee Historic Commission (THC) allowing the Nathan Bedford Forrest bust to be moved from the State Capitol to the Tennessee State Museum.

Eley said that Lee’s remarks from the prior day would be included to substantiate the compelling interest for the moving of the bust.

Fellow State Commissioners Branscom and Salyers, after making comments on their reasoning, both said they would be voting in favor of the motion.

Citizen-member of the Commission from East Tennessee, Hallerin Hill said Forrest’s Pole-Bearers speech reflected redemption, which is turning away from something toward something else.  Hill saw that as a move to a new position, and that a bust could change positions to tell the whole story.

Hill concluded that he would support the governor to move the bust.

Senator Jack Johnson, as the Senate representative, said that he polled his fellow Senate members and received 19 votes to not remove and 14 votes to remove the bust.  He said that was a similar vote to about three years ago, when he was also a member of the SCC

While not compelled to vote according to their wishes, Johnson said he felt it was important to have the conversation and would be voting accordingly.

It was at that point, which was approximately two hours into the meeting, that Eley announced a 15-minute recess.

Upon return from the recess, SCC citizen member from West Tennessee, Dr. Logan Hampton, made the point that the Commission’s action or vote will have no impact on the history of the individual they debate.

He told the story of the surrender at Appomattox and the tip of the hats between General Grant and General Lee in honor of each other, expressing hope that “we tip our hats to one another, to live out our true southern heritage and hospitality.”

While Representative Matthew Hill (R-Jonesborough), said he had no additional comments, but as Johnson indicated before the recess, he would be voting to represent the House.

Comptroller of the Treasury Justin Wilson proposed an amendment to the original motion that would add the statues of Admirals Farragut and Gleaves also be moved from the second floor of the State Capitol to the state museum to be part of an honoring of Tennessee’s military heroes and that the alcoves vacated would be used to commemorate federal or state elected officials or events that have occurred on the second floor, as determined by the Tennessee General Assembly.

Wilson went on to explain that the bust was placed on the second floor of the Capitol as part of a 1973 resolution to recognize General Forrest clearly and unambiguously for his military achievements, and passed unanimously by both houses.

“But a portion of our population has come to view this statue as something very different,” Wilson continued.

As a very practical matter, Wilson said, “the original focus and intent cannot be appreciated today.”

Wilson elaborated on the reasons for his amendment and his thoughts on the Capitol’s second floor honoring.

He then set the record straight about the 1973 resolution for the Forrest bust, saying that for those that said it was designed for white supremacy are misinformed.

Discussion ensued on the amendment, including concerns expressed by citizen member from middle Tennessee, Howard Gentry that adding two busts to be moved would delay the move of the Forrest bust, making it clear he was there to vote on the removal of the Forrest bust.

Executive Director of the Tennessee State Museum Ashley Howell came forward to confirm that they are prepared to take all three busts as long as the time frame is open and they can properly plan for it and include the appropriate scholars as part of the process.

When Gentry expressed further concern that the THC has the ability to sever the additional two busts in order to preserve the moving of the Forrest bust, Commission Counsel Christi Allen was called upon for an opinion.

Allen advised that, though she had not been through the process with the THC  before, a single petition for a waiver would be prepared and filed with supporting documents and no sooner than 60 days later the THC would hold a de novo hearing on it.  Her assumption is that the THC would then take whatever action they deem appropriate, regardless of what the SCC proposes.

Wilson’s amendment to the main motion passed with 8 yes votes, 1 no vote and 2 abstentions.

Before voting on the amended motion, closing remarks were made by Secretary of State Tre Hargett as well as Gentry.

The vote for the amended motion for moving the statues of General Nathan Bedford Forrest and Admirals David Farragut and Albert Gleaves passed with 9 yes votes and 2 no votes from the legislative members Johnson and  Hill.

The THC  is responsible for considering and voting on petitions for waiver under the Tennessee Heritage Protection Act.

Of the 29-member THC, 24 members are appointed by the governor and five ex officio members include the governor himself, the state historian, the state archaeologist, the commissioner of environment and conservation, and the state librarian and archivist.  It takes a two-thirds majority vote by roll call to grant the waiver.

The Commission usually meets in February, June, and October.

After the meeting’s conclusion, Sparks told The Star that he thought it was a good meeting and discussion.

He voted against moving the bust in House committee meetings and recognized that people are going to be disappointed with the outcome.

Sparks was very positive, however, about the ability to tell the full story of Forrest, including his advocacy for Black Americans and the attendance of Black Americans at his funeral.  “Let’s tell Forrest’s story.”

He also wants the story of Sampson Keeble to be told, as the Confederate soldier who, as a Republican, was the first African-American state representative.

Reflecting on the outcome of the meeting, various incidents that occurred when he has tried to tell the story of Nathan Bedford Forrest, as well as the removal of State Representative John J. DeBerry, Jr. from the ballot by white elitists, Sparks reassured, “God’s got this.”