We have had some sickness among the legislators and the staff. The members of the General Assembly and staff have not been immune to all the flu and viruses going around in the general public.  One lawmaker had surgery a couple of weeks ago and another is undergoing some medical tests. And do remember their families as so many of them leave home on Mondays and don't go home until Thursday afternoon.

LILY'S CORNER:
History is great, right? During my time at the Capitol last Tuesday, I had the fun privilege of being able to play Tennessee trivia with Rep. John Ragan from Oak Ridge. I learned several things through that very enjoyable experience; including that element 117 on the periodic table (Tennessine) was created in Tennessee on January 17, 2017. Isn’t that amazing? Plus, when we were leaving, he gave me an autographed, “yellow” Bluebook (the yellow cover is in honor of the one hundredth year since the suffragist movement, 1920-2020.) Through this lighthearted moment, I learned that legislators can have fun while serving this state.

CJ's CORNER:
This past Wednesday was particularly eventful at the capitol building. I shadowed Mrs Bobbie Patray and Mrs Joanne Bregman as they lobbied for a new bill. Great progress is being made on the bill and there are many excellent people behind it. During this week, I also had the pleasure of meeting another lobbyist, Phillip Johnson (a former state representative), who told us about his history in politics. Overall this week was still about getting the ball rolling so to speak but I’m excited for the next day.

TO SERVE THE PEOPLE OF TENNESSEE, OUR TENNESSEE EAGLE FORUM TEAM:

IN CASE YOU DON'T THINK WE ARE WORKING HARD FOR YOU:

The number of steps we took Tuesday and Wednesday are clear evidence of the energy that we are using getting in to see the appropriate lawmakers and talking to them.

HJR 0741 by *Weaver , Doggett, Todd, Hill T, Cepicky, Ragan, Gant, Reedy, Leatherwood, Van Huss, Moody, Hill M, Crawford, Moon, Rudd, Grills, Garrett, Wright, Byrd, Hawk, Casada, Hulsey, Carr, Williams, Eldridge, Marsh, Halford, Smith, Rudder, Keisling, Sexton J, Hicks, Terry
General Assembly, Statement of Intent or Position - Affirms the constitutional duty and exclusive authority and power of the General Assembly to appropriate public moneys and balance the state budget.
•  this resolution is strictly about Tennessee’s Constitutional status as a sovereign state, AND, the status of the Tennessee General Assembly as a separate and independent branch of the state government as established by the state Constitution
•  to affirm that neither the federal government nor any other branch of the Tennessee State government have the authority to bypass the General Assembly when the expenditure of public money and the state budget is involved.

We are very grateful to Rep. Terri Lynn Weaver for sponsoring this important resolution dealing with these important Constitutional issues and to the 32 House members who have signed on as co-sponsors.
Rep. Weaver was one legislators who joined the 'first in the nation' lawsuit as an individual plaintiff in 2017.  It is our hope that this 10th Amendment lawsuit will get to the US Supreme Court and that this resolution will demonstrate the support of the TN General Assembly to address these Constitutional issues.
ACTION:  Is your House member a co-sponsor?  If not, click on this LINK, find your representative, either email or call, and POLITELY ask him or her to sign on the HJR741.


PROPOSALS WE ARE GLAD TO SEE:

ALTERNATIVES TO THE ACT/SAT:

HJR 0682 by *Cepicky , Moody
General Assembly, Statement of Intent or Position - Urges the State of Tennessee to evaluate the Classical Learning Test (CLT) for State-sponsored scholarships and admission to public universities
I have met with the CLT folks several times and I am very impressed with this test. Hopefully Tennessee students will soon have this option.

Women's Suffrage: Tennessee and the Passage of the 19th Amendment . 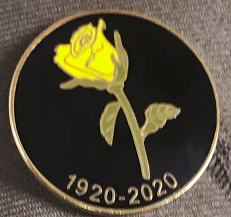 If you don't know, 2020 is the 100th anniversary  of Tennessee passing the 19th Amendment which gave women the right to vote. Supporters of the amendment used the Yellow Rose as their symbol, the opponents used the Red Rose.  Legislators were issued these beautiful pins to mark this  historic occasion. The Secretary of State has a great history on his website and if you haven't read it and know about the young Harry Burn, you will want to click on the link above and learn about that interesting story!! (Thanks to  Rep. Scott Cepicky for letting me get a good picture of his pin.)

Bill Lee Introduces Pro-Life Legislation Written with a Court Challenge in Mind .
[We don't have any details about language yet.]

Gov. Lee says he signed LGBT adoption refusal bill to protect religious liberty .
Children deserve to be adopted into a home with a mother and a father | Opinion .
Tennessee bill seeks to raise minimum wage to $15 per hour .
Bill would legalize sale of half ounce of marijuana .
Capitol Commission to discuss Forrest bust in February .
Gov. Bill Lee's criminal justice group calls for state to rewrite sentencing laws .