Clearly, our 'prayer' list has become a lot longer in the past week and I urge every to read and pray Psalm 91 as we navigate the new world in which we are living. The need is immediate and very great!! 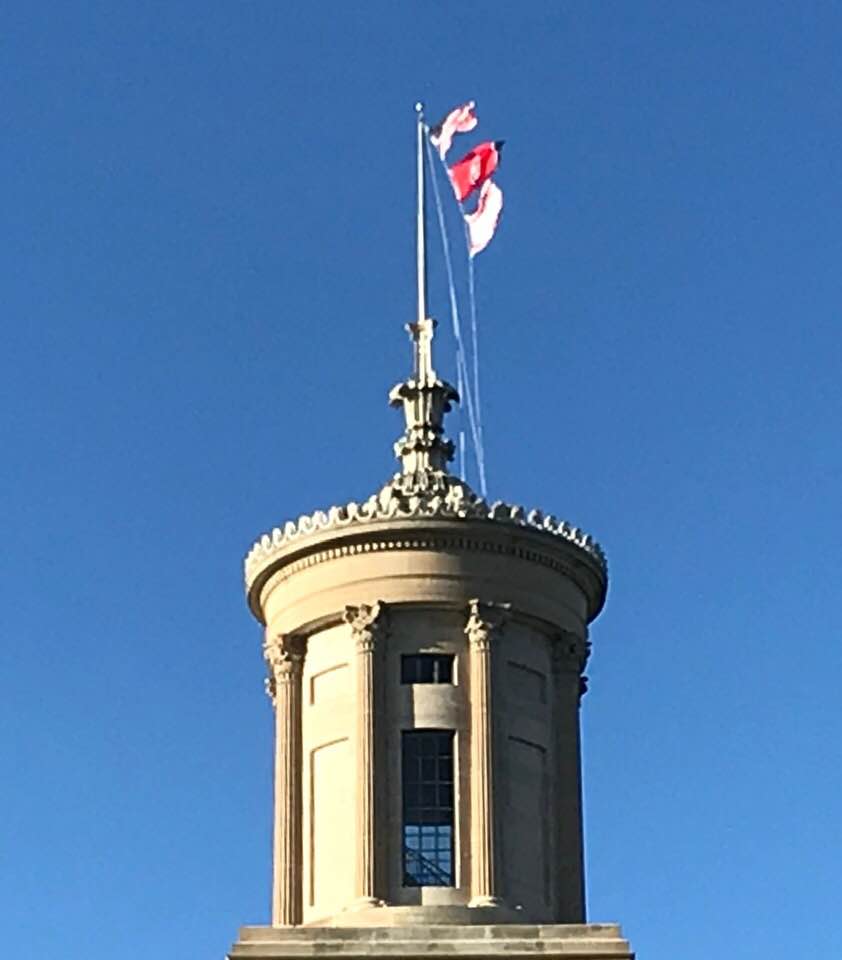 LEGISLATIVE STATUS:
Well, what a difference a day makes.  Toward the end of last week, out of an abundance of caution, the Capitol/Cordell Hull complex was closed to the public, to the lobbyists and to all but the necessary personnel and lawmakers. Even the staff members that are over 60, especially with any health problems, were encouraged to stay home.

So that means, for the second time in 33 years (my husband had open heart surgery in April of 2012), they did legislative business without me being there, and, of course, our interns, Lily and CJ missed out on the excitement too.

“Over the last week, we have remained in close contact with the state’s health leaders, and we have continued to carefully monitor the complex and aggressive COVID-19 virus in Tennessee. The latest guidance from both the CDC and the Department of Health requires us to take unprecedented action. In the best interests of public health, we have jointly decided to limit all remaining legislative business to fulfilling our constitutional requirement of passing a balanced budget, and any associated actions that will ensure Tennessee can keep its doors open. This is a serious time for our state and country, and we all must make adjustments in response to this threat. Our approach will take into account the unique public health challenges this complex virus presents, as well as the economic disruption likely to occur as a result of its spread. Passing an amended budget now and recessing will allow the General Assembly to focus on an immediate plan of action, while still determining needs down the road. This pathway forward should only be reserved for extraordinary circumstances. We will continue operating out of an abundance of caution and take additional action if it becomes necessary.”

MONDAY EVENING:
The Senate met at 4:30pm where they voted to re-refer the entire floor calendar to the Calendar Committee.Then each committee chairman moved to replace the current committee calendar with an abbreviated calendar dealing mostly with bills that had to do with passing the state budget, the only action required of the General Assembly by the Construction.

The House met briefly at 5:00pm where they rolled all the bills on their floor calendar to Thursday and all the committee meetings on Tuesday were rescheduled. The expectation is that the General Assembly can recess by the weekend and come back in a few weeks to deal with the rest of the legislation left in limbo. The House will meet at 9:00 on Tuesday morning.

TUESDAY:
The House met briefly just after nine o'clock and recessed at 9:28 after taking care of some scheduling business and passing the Consent Calendar. They did pass the "flow" motion - which allows bills to move freely from one committee to another and to the floor without having to wait a week between each move. All the House committees were canceled for today. Some will meet tomorrow.
The Senate met at 3:30pm and mostly spent time rescheduling the committee calendars for tomorrow, recessing at 3:55. Today was to be 'bring your dog to the legislature and Senators Pody and Lundberg did just that!!

WEDNESDAY:
A number of Senate Committees met to begin moving the critical pieces of legislation. In the House a number of committees met and some were canceled.

THURSDAY:
Meetings for both chambers alternated between the respective floors and the committee meetings, and they finally passed a 'pared down' budget and adjourned until June 1st and left late that night

WHAT HAPPENS NOW?
All of our bills and the other bills that were in motion when all this happened can be heard when the General Assembly reconvenes in June.  However, during a 'hot' election season, I could anticipate that a lot of bills might be left in the dust.  Believe me, we will do our VERY BEST to get our bills heard and dealt with before they adjourn 'sine die'!!  Legislative Updates will resume on June 6, 2020.


An Unprecedented Day at the Tennessee General Assembly
March 17, 2020 Laura Baigert
In the wake of the developing COVID-19 coronavirus pandemic and the subsequent declarations of emergencies by President Trump and Governor Bill Lee, the Tennessee General Assembly experienced its most unprecedented day in its history.
Monday started with access to the Cordell Hull Building limited to elected members, staff and members of the media. Anyone arriving at the home of the legislature would have been greeted to taped signs on the locked doors reading, “This Property is closed to the Public. If you need Assistance Call 741-7860.”
Not surprisingly under the conditions, the hallways, lobby areas, and cafeteria were all but deserted.

The Tennessee General Assembly adjusted schedules at the start of the week for Tuesday to address only those procedures and bills deemed necessary to fulfill the constitutional requirement of passing a balanced budget for fiscal year 2021, which runs July 1, 2020, to June 30, 2021.
As such, the House cancelled all committee meetings and held only a brief floor session of about 15 minutes, in keeping with recommendations to keep time in close proximity limited.
State House Majority Leader William Lamberth (R-Portland) advised of a “somewhat unprecedented procedure” to add items to committee calendars for Wednesday, and then listed in rapid-fire fashion the bills that are to be heard and the designated committee.
Lamberth also reviewed the specific rules that would be suspended in order to facilitate the “flow motion” of bills, without the usual advance notice and wait periods or limits on the number of bills to be heard on the House floor. The flow motion rule suspension is temporary and very limited, being in effect only until specific bills get to the House floor and will not affect bills when the session continues at some later date.
Fifteen House committees will meet on Wednesday, and all other committees are canceled for the week.
The House stands in recess until Wednesday at 9 a.m.
Meanwhile, the state Senate had several committee meetings, beginning with Finance, Ways & Means having 10 items on the calendar, two of which increase taxes on Tennesseans.
Chairman Bo Watson (R-Hixson) said the first four bills on the calendar would be taken up at a later date, as they would be considering only those bills that are considered critical, mandatory or obligatory.

Tennessee’s lawmakers worked all day and well into the evening Thursday to approve a budget for fiscal year 2021 before adjourning for a recess that will go until June 1, 2020.
The amended budget, received from the governor’s office on Wednesday, lowered the growth rate of the current fiscal year from 3.75 to 2.5 percent as the basis, and then projected a 0.25 percent growth rate for the upcoming fiscal year instead of the 3.1 percent originally included in Governor Lee’s February budget, as The Tennessee Star reported.
The amended budget will fully fund: the BEP (Basic Education Program) formula for K-12; higher education outcomes-based funding formula; pension contributions; OPEB (Other Post- Employment Benefits) liability contribution; inflation growth in TennCare; and DCS (Department of Children’s Services) growth in services.
Additional funding will be provided to address capital maintenance projects in state government and higher education.
To address the tornado disaster and coronavirus there are increases to the TEMA disaster relief fund; repair of state buildings; double grants to cities and counties from the planned $100 million to $200 million,  which is a safety net for mental and primary care health; the rainy day fund of $300 million over the $50 million planned.
State employees are set to get a 1.5 percent pay increase, reduced from the original 2.5 percent, and teachers will receive a two percent pay increase down from the original four percent, even as unemployment claims in Tennessee within the private sector have skyrocketed, The Star reported.
The budget legislation comes in the form of four separate bills: annual appropriations; bond issuance; addressing Article II, Section 24 of the Tennessee Constitution authorizing state spending to exceed the growth in the state’s economy, otherwise known as the Copeland Cap; and any statutory revisions in order to enact the annual appropriations bill.

The lawmakers said they are trying to eliminate as much stress as possible for students, parents and educators as we all deal with the coronavirus pandemic

Author: WBIR Staff Updated: 5:57 PM EDT March 19, 2020
NASHVILLE, Tenn. — The Tennessee House and Senate have passed an amended bill to waive student testing and attendance requirements because of uncertainly if students will be back in the classroom anytime soon.
The lawmakers said they are trying to eliminate as much stress as possible for students, parents and educators and eliminate any adverse effects the coronavirus pandemic will have on the education system.
The new proposal will immediately waive the following:

SPECIAL APPRECIATION TO:
As you know despite the Capitol/Cordull Hull being 'shut down' for safety's sake, we could watch all of the legislative activity online.  That means that the IT folks were there, working hard and making all the 'magic' happen!!  The Senate Clerk's office and the House Clerk's office did yeoman's work keeping up with everything for the respective committee meetings and the floor sessions moving at such an accelerated pace.  The attorneys in Legal Services had to be there working hard.  The Legislative staff members, the cleaning staff that thoroughly cleaned every room when a meeting was over getting ready for the next. And, of course, the lawmakers who were there to carry out their only Constitutional responsibility, passing a budget, so that the business of the State could continue. Many of these folks have spouses, small children, older parents or grandparents, to be concerned about in these risky days. Thanks to all.