Well, for better or worse the Legislature adjourned early Friday morning. We are facing the election cycle at the state and national level.  If EVER we needed prayer it is NOW, on so many levels.  With all that is going on, I believe the nation hangs in the balance. I URGE you to pray regularly and fervently as these next few months unfold asking God to intervene. 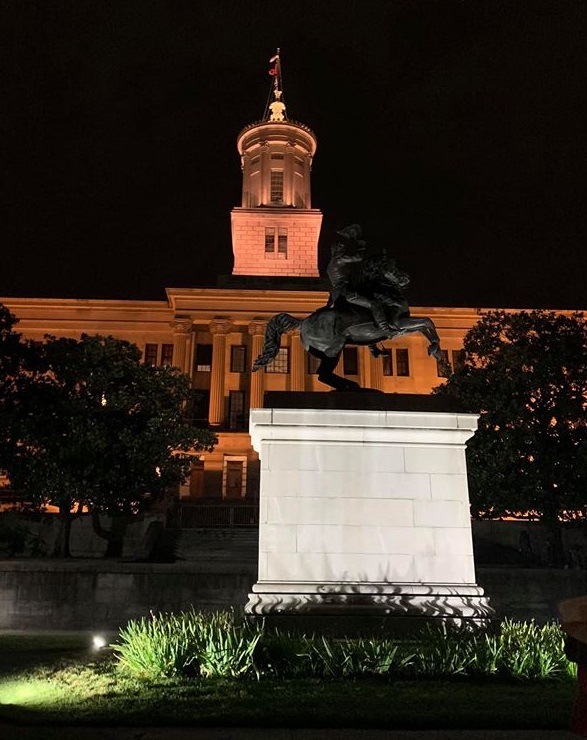 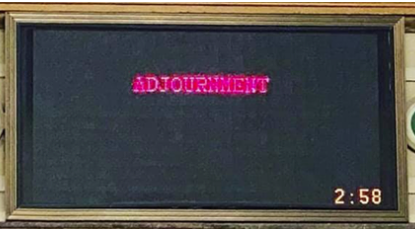 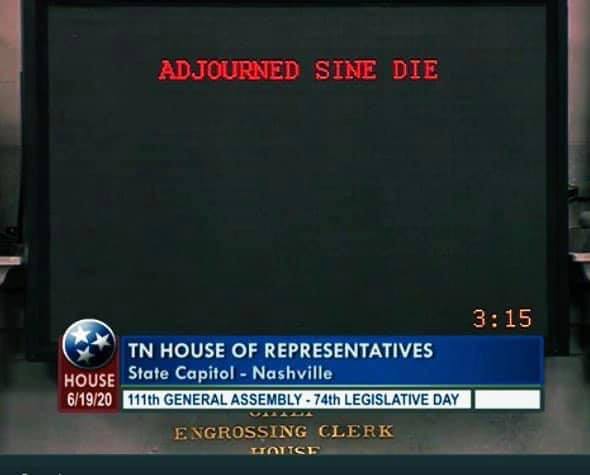 NOTES:
I have been at the Capitol for 33 years and I can truthfully can say I have never seen a session like this one. The first three months were fairly normal - working very hard on our resolution and three other bills.  Then came the pandemic when life for all of us changed dramatically. The Legislature recessed on March 19th with plans to return June 1st.  They did return, but to a very different situation. The restrictions for being in Cordell Hull and the Capitol were pretty severe including masks being required. The Committee rooms, the Floors of the House and the Senate Chambers had been significantly changed. One does wonder what kinds of limitations will come with the 2021st session in January.

Probably, due in part to the chaos running rampant across our state and nation now, you could feel the tension on the House floor this week. Things finally boiled over. Speaker Cameron Sexton announced, in no uncertain terms, that he wanted to see the leaders of both parties in his office as soon as the floor session recessed on Wednesday. Kudos to him for trying to resolve these differences in order for the House to get the business of the state completed. As the House prepared to adjourn, Sexton commented that the House led (they certainly did), the House charged, the House conquered; (emphasizing) that they all grew together.

In a touching jester, Speaker Sexton called retiring Speaker Pro Tem Bill Dunn to the podium to close the session, telling him how much he would be missed.  He presented Rep. Dunn with the ceremonial gavel commenting that it isn't flashy but solid, just like Bill.


I AM SO SORRY THAT OUR INTERNS HAD THEIR TIME CUT SHORT AND WERE UNABLE SEE THE FRUIT OF ALL OF OUR HARD WORK. THEY WERE SUCH A JOY AND A BLESSING TO HAVE WITH US.

LILY'S CORNER:
For three months, I had the great privilege of working with two of the most amazing and dedicated lobbyists, Mrs. Patray and Mrs. Bregman. Even though my internship was cut short by the devastating coronavirus, I enjoyed every minute I spent at the capital. One of the most valuable lessons I’ve learned during this time is to know your topic and exude confidence in a debate on the legislative floor. I learned this from Sen. Paul Rose of District 32, when I witnessed him defending a bill which he sponsored. It was clear that he was prepared and had done his research, for he debated very well against a veteran Senator. His unwavering resolve in his position was quite inspirational. Throughout my time at the Capitol, I was also encouraged by Mrs. Patray and Mrs. Bregman as they inspired me with their diligent effort in their work to honor God and our government. It was such an honor to work with them, this session. Therefore, I would like to personally thank those two outstanding women from the bottom of my heart for giving me this opportunity. I shall never forget it.

CJ'S CORNER:
Unfortunately, my internship with Mrs. Bobbie Patray was cut short due to the Covid-19 pandemic. In spite of this, I learned quite a bit during my three months with Mrs. Patray and Mrs. Bregman. For instance, the legislative process is a convoluted, long process. Bills must be sponsored by legislators, then go through the house and senate, then if no changes are made, it can be passed if not vetoed by the governor. I will always be thankful for the opportunity to have this experience and especially to have seen the tangible importance of lobbying. Here’s to a, hopefully, less obstructed year in 2021.

Embossed on the top of the box is the Scripture verse from which Eagle Forum received its name:
" But they that wait upon the Lord shall renew their strength; they shall mount up with wings as eagles; they shall run, and not be weary; and they shall walk, and not faint." Isaiah 40:31

Rep. Ron Gant, Rossville,   Assistant Majority Leader for 111th Tennessee General Assembly.
Rep. Gant was first elected to served in the 110th (2017-2018) TN General Assembly and has quickly proven himself to be an excellent, skilled, and dedicated legislator. He was the sponsor our most important piece of legislation this year, HB1929, which prohibits the governor from making a decision or obligating the state of Tennessee in any way with regard to resettlement of refugees unless authorized by joint resolution of the general assembly.  He spent countless hours working on our bill and his presentations in the committees were outstanding.  Due to the inaction in the Senate, we will start over with our bill in 2021. We wanted to express our deep appreciation to Rep. Gant  for his friendship and for his commitment to our bill and honor him with our Award. [catching him between meetings, I was so sorry there was not time for a picture.] 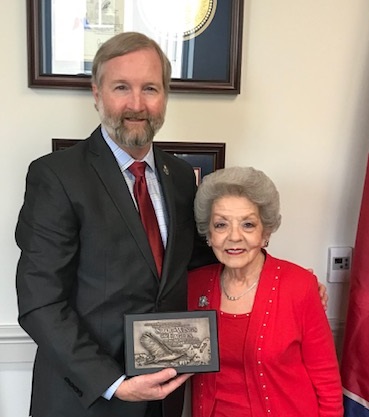 Rep. Chris Todd, Jackson, was elected by his 19 freshman peers to serve as Assistant Republican Floor Leader.
Rep. Todd's leadership qualities were quickly recognized by his colleagues and the way he has carried out his duties with both the large freshman class and in the Republican caucus has been outstanding. Rep. Todd quickly became a good friend to TN Eagle Forum and has provided his unwavering support for our legislation among his peers and in committee. We wanted to recognize and express our deep appreciation as we honor him with our Award.

Rep. Jim Coley, Bartlett, Chairman on the Higher Education Committee, is retiring this year after serving his district and the state

since he was elected for the 105th (2007-2008) Tennessee General Assembly.  Rep. Coley leaves an impressive legacy in a number of areas. Just one example - because of his hard work, TN has some of the best laws in the nation dealing with sex trafficking. He sponsored two important bills for us this year - HB2615, dealing with juvenile sexual harassment, which passed the House floor 95-0, and HB2616, prohibiting custody and inheritance rights to those convicted of rape and who plea down, which passed the House floor 90-0.  Again, due to the inaction in the Senate, we will start over next year. We wish Jim well in the next season of his life. We wanted to honor all his years of hard work and dedication.

BILLS OF INTEREST THAT WERE EITHER LEFT ON A SENATE COMMITTEE CALENDAR OR WEREN'T FINALIZED IN THE HOUSE BECAUSE THE SENATE CLOSED THEIR COMMITTEES BEFORE THEY COULD BE HEARD:


LIBERTIES AND FREEDOMS:
SB 2368 by *Pody -HB 2291 by *Hulsey
In the  House State Committee on Wednesday, Rep. Hulsey amended a bill he had to address the authority of the governor, chief executive officer to enforce a provision of an executive order. It was left on the desk in the House.


MAINTAINING LAW AND ORDER:
SB 2273 by *Stevens, HB 2620 by by *Lamberth
The amendment introduced by House Majority Leader William Lamberth, R-Portland, and supported by Rep. Michael Curcio, R-Dickson, would require anyone charged with rioting be detained in law enforcement custody for at least 12 hours and face a minimum jail sentence of 30 days if convicted. The proposal was debated in the House judiciary committee. It is an amendment to House Bill 2620, which raises the permissible fine for aggravated assault to no more than $15,000. Ultimately there were two amendments introduced: Number 1; Number 2.  House bill was left on Floor calendar, Senate bill was referred to Judiciary Feb 10 and never heard.


OPEN CARRY:
SB 2671 by *Johnson, HB 2817 by *Lamberth
As amended, House Bill 2817, would allow for both open and concealed carrying of handguns for people 21 and older, as well as for military members who are 18 to 20. House members spent hours debating the legislation in between hearing testimony from several speakers against it and one in support. It was left in the House Finance, Ways and Means committee; was deferred in Senate Finance in March and never taken up again.

OTHER ARTICLES OF INTEREST:

Senate dangles approval of abortion bill to get House to back down on budget .