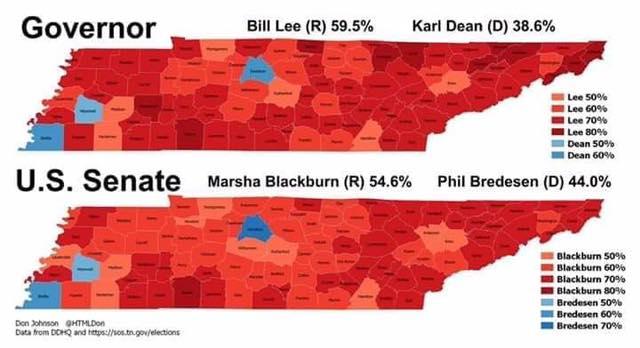 While there will be plenty of new faces as the Tennessee legislature enters into its 111th general assembly, the total number of seats held by Republicans is reduced by one, but still carries the super majority status of both chambers through a volatile mid-term election.

All 99 seats in the State House of Representatives, consisting of 74 Republicans and 25 Democrats, were up for election during Tuesday’s mid-term elections. There were a total of 24 House seats vacated prior to the primaries, several of whom ran for other elected positions at the local, state or national level.

Additionally and quite remarkably, two House Committee Chairmen, Barry Doss (R-Leoma) and Tim Wirgau (R-Buchanan) were defeated in the August Republican primaries by first-time conservative candidates Clay Doggett (R-Pulaski) and Bruce Griffey (R-Paris) in Districts 70 and 75, respectively.  Both Doss and Wirgau voted for the gas tax increasing IMPROVE Act, which was a major factor in both races.

It’s not as though Republicans didn’t have a fight on their hands, since just eight House Republican candidates went unchallenged by a Democrat in Tuesday’s elections, while nine had to battle both a Democrat and an Independent opponent.

Meanwhile, House Democratic candidates got off easier with 15 running unopposed in the general election, and only two having both a Republican and Independent challenger.

Republicans picked up House District 82, vacated by House Democratic Minority Leader Craig Fitzhugh (D-Ripley), a member of the Tennessee House since 1995. Fitzhugh ran against former Nashville Mayor Karl Dean in the Democratic primary for governor, losing to Dean by more than 100,000 votes. Dean lost in Tuesday’s general election to Republican Bill Lee who took nearly 60 percent of the vote with 26 independents also in the race.

Offsetting the win in District 82, Republicans lost House District 13. The seat held by Eddie Smith (R-Knoxville) went to former State Representative Gloria Johnson, who held the seat from 2013 to 2014. Smith took the seat from Johnson by a mere 182 votes in 2014. Smith defeated Johnson again in 2016 by an even smaller margin of 151 votes in a much higher turnout Presidential election. Running unopposed despite voting for the IMPROVE Act, Smith won the 2018 Republican primary by more votes than Johnson won the Democratic primary.  However, Smith could not hold on during the general election where Smith lost by the largest margin yet of 2,450 votes. The Independent candidate with 393 votes was not a factor.

Another strong potential pick-up for Republicans was Tommy Vallejos, who ran for the House District 67 seat in Clarksville vacated by retiring Democratic Representative Joe Pitts. Vallejos had a competitive showing in the Republican primary with 2,426 votes against the Democratic primary winner, Jason Hodges who received 2,746 primary votes. Hodges went on to win the general election taking 52 percent of the vote to Vallejos’ 45 percent, maintaining the seat as Democratic.

State Senate seats are up for election every other year, so just 18 of the total of 33 positions were voted on in the general election Tuesday. The balance of 15 Republican to three Democratic seats was maintained.

The District 22 State Senate seat held by Mark Green (R-Clarksville), who by 67 percent won the U.S. House District 7 vacated by Congressman Marsha Blackburn’s run for U.S. Senate, will be filled via a future special election.

Newly elected legislators technically assume office on the date of the election, but won’t be sworn in until January 15, 2019. Between now and then, each body will hold their respective caucus meeting from which new leadership will be elected. An entirely new leadership slate will be required for the State House of Representatives, a result of the cascade effect caused by Speaker Beth Harwell’s departure to run as a candidate in the Republican gubernatorial primary which she lost in August.