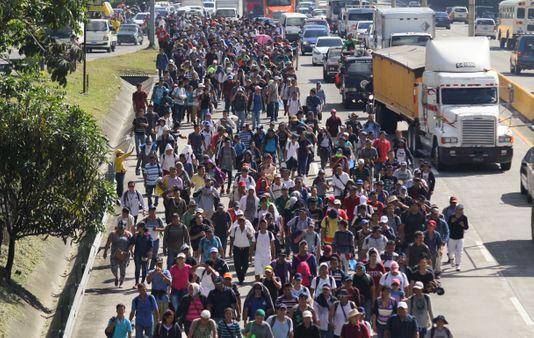 Immigration
Official Says Majority of Caravan Made Up of Single, Adult Males

Approximately two-thirds of the Honduran caravan that is making its way to the U.S. border is made up of adult men, according to the Washington Examiner.

Roy Villareal, a senior patrol agent of the U.S. Border Patrol’s San Diego Sector, told the Examiner that while “20 to 30 percent” of the caravan is made up of women and children, the largest group of migrants heading toward the U.S. are single, adult males.

The Examiner notes that children and single-parent families who enter the country won’t be prosecuted if they claim asylum.

However, the process for granting asylum can take up to a couple of years, and the Department of Homeland Security is only capable of holding a few thousand people at any one time.

As a result, “tens of thousands of people were released into the country in fiscal 2018 and told to appear for immigration court dates in the future,” the Examiner reported.

Because the U.S. has been so slow to deport illegal immigrants, many are now incentivized to try to sneak in rather than claim asylum, the U.S. Customs and Border Protection said.

Single adults who are caught trying to enter the country illegally are turned over to the Justice Department for prosecution.

A first-time offense is considered a misdemeanor; after that, it’s a felony.

On Wednesday, President Donald Trump addressed his decision to send military troops to the border ahead of the caravan, saying the number of troops sent to the border could reach as high as 15,000.