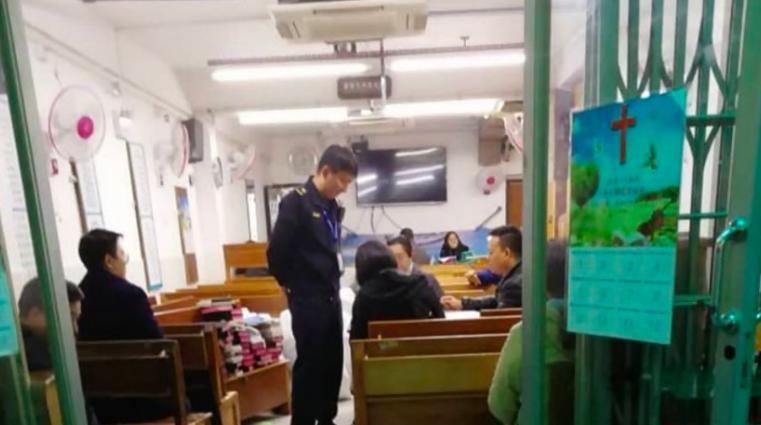 Chinese police shut down a third prominent underground church this winter Saturday after raiding a children’s bible study and confiscating over 4,000 Christian books.

Authorities in Guangzhou raided the Rongguili Church at 10 a.m., announcing to parents and children at the Bible study that all activities at the church were suspended and declaring that the unregistered church had violated China’s Religious Affairs Regulation. Police recorded the identities of all attendees, children included, and dismissed them from the church, warning them not to return.

“Halfway through the children’s Bible class, we heard the footsteps of dozens of police and officials stomping up the stairs,” an attendee of the Bible Study said, according to South China Morning Post. “They read out law enforcement notices declaring our venue was an illegal gathering that had engaged in illegal publishing and illegal fundraising and confiscated all Bibles.”

“They then verified our identities again and warned us not to return to the church before letting us go,” the church member added.

Authorities also arrested one parent who reportedly tried to photograph the incident.

The closure of the Rongguili Church, which served about 5,000 Christian faithful in its weekly services, comes only days after authorities in Chengdu shut down Early Rain Covenant Church and arrested its pastor and 100 of its 500 members. Authorities also shut down Zion Church in Beijing, which served 1,500 members, in September.

The late Pastor Samuel Lamb Xiangao, who helped lead China’s underground house church movement, founded the Rongguili Church in 2000. It was one of the most prominent centers of Christian worship in Southern China, according to members of the local Christian community. Its closure is part of Chinese authorities’ increasingly severe crackdown on churches that have not officially registered with communist authorities, in accordance with stringent religious regulations that China implemented in February and has used to inhibit church attendance and promote worship of the state.