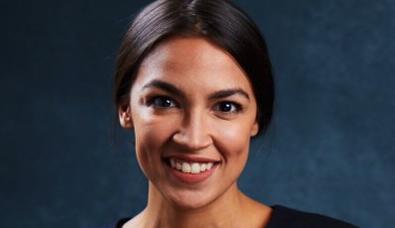 Government
Did you catch these sometimes hidden messages from lawmakers as Congress returned to work?

WASHINGTON - The choice of earrings. The book that was used to swear them in. A flag outside their office.

Congress' newly sworn in lawmakers have taken bold stances in seemingly subtle ways to raise awareness and show off what makes the 116th Congress so diverse.

Here's a rundown of some of the sometimes subtle or hidden messages lawmakers have used during their swearing-in and first few days in Washington that you may have missed.

She's already the youngest person elected to Congress and doesn't shy away from taking bold stances.

New York's Alexandria Ocasio-Cortez offered an array of subtle messages in her clothing choice during her swearing in this week to honor women's suffrage and embolden young women who will come after her.

Wearing an all-white suit, gold hoops earrings and bold red lipstick, Ocasio-Cortez said her outfit was to "honor the women who paved the path before me, and for all the women yet to come."

White is one of the official colors of the suffragist movement and a similar effort was done in 2017 with dozens of Democratic women wearing all white to protest President Donald Trump.

"I wore all-white today to honor the women who paved the path before me, and for all the women yet to come," Ocasio-Cortez posted on Twitter. "From suffragettes to Shirley Chisholm, I wouldn’t be here if it wasn’t for the mothers of the movement."

She added in another tweet that her lipstick and gold hoop earrings were inspired by Sonia Sotomayor. Ocasio-Cortez said in the tweet that Sotomayor "was advised to wear neutral-colored nail polish to her confirmation hearings to avoid scrutiny."

"She kept her red. Next time someone tells Bronx girls to take off their hoops, they can just say they’re dressing like a Congresswoman," Ocasio-Cortez wrote.

Rep. Deb Haaland made history as being one of the first of two Native American women sworn into Congress this week. She paid homage to those roots and her heritage with wearing traditional pueblo garb during her swearing in.

Haaland, a member of the Pueblo of Laguna tribe, donned moccasins, turquoise jewelry and a tunic with bright turquoise sleeves.

Her family, including her mother who was in a wheelchair, similarly wore pueblo attire with intricate patterns and hues of red, brown and bright turquoise colors.

After she was sworn in, Haaland shared a moment with fellow Democrat Sharice Davids of Kansas. The pair, who were the first Native American women to ever be elected in Congress, shared a hug.

But Omar also became Minnesota's first Somali-American legislator, the first woman of color elected to Congress from the state and the first woman in Congress to wear a hijab, a Muslim head covering.

She celebrated that during her first day in Congress Thursday wearing a red and orange hijab then donning a black traditional head covering during her swearing in ceremony. She also placed her hand on the Quran of her late grandfather when she was sworn in.

"As a kid, I acted as my grandfather's translator at our caucuses and he was the one who first sparked my interest in politics," Omar wrote on Twitter. "I wish he could be here to witness this historic moment, but he was here in spirit as I placed my hand on his Quran for the ceremonial swearing-in."