NEWS
‹‹ Kyrsten Sinema swears in to Congress using copy of Constitution instead of religious book
Did you catch these sometimes hidden messages from lawmakers as Congress returned to work? ›› 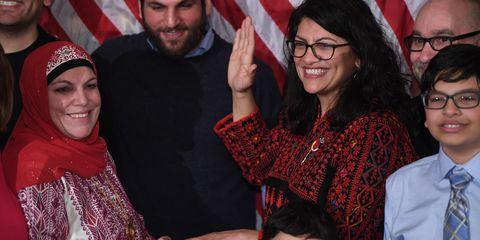 Freshman U.S. Rep. Rashida Tlaib wasted no time in calling for the impeachment of President Donald Trump just hours after being sworn in.

Speaking to a crowd of supporters Thursday night, the Michigan Democrat and one of the first Muslim women elected to Congress said of Trump: "People love you and you win. And when your son looks at you and says, 'Momma, look you won. Bullies don't win.' And I said, 'Baby, they don't, because we’re gonna go in there and we’re gonna impeach the mother****er.'”

She later stood by her remarks, tweeting she will "always speak truth to power."

"President Donald Trump is a direct and serious threat to our country. On an almost daily basis, he attacks our Constitution, our democracy, the rule of law and the people who are in this country,” Tlaib wrote. "Each passing day brings more pain for the people most directly hurt by this president, and these are days we simply cannot get back. The time for impeachment proceedings is now."

To remove a sitting president, the constitution requires conviction of “treason, bribery, or other high crimes and misdemeanors.” The impeachment process would further require the consent of both the House and two-thirds of the Senate, which is still a Republican majority.