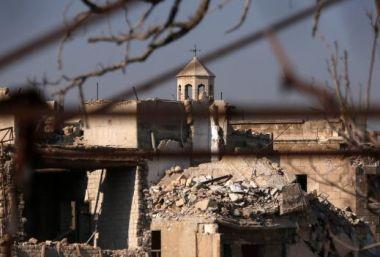 Syrian Christians have shared how they converted from Islam to Christianity after witnessing the brutality of Islamic extremist groups like ISIS, who carried out barbaric acts in the name of Allah.

Members of the recently-established Church of the Brethren in Kobani — the first local Christian place of worship for decades — shared with NBC News how Christianity appealed to them after living under Sharia law.

Farhad Jasim, 23, who works as a mechanic, converted to Christianity late last year. He told NBC he was jailed by ISIS for six months in early 2016 after the militants discovered he didn't know the basics of Islam. During his time in captivity, he was tortured and forced to read the Quran.

"After I witnessed their brutality with my own eyes, I started to be skeptical about my belief," Jasim said.

After hearing about the Church of the Brethren, which opened in September and is part of a denomination that dates back to 18th-century Germany, Jasim decided to visit: "It didn't take me long to discover that Christianity was the religion I was searching for," he said.

Jasim told the outlet his family has rejected him because of his newfound faith and expressed hope that one day, his loved ones will not only forgive him but embrace Christianity, too.

"If ISIS represents Islam, I don't want to be a Muslim anymore," he said. "Their God is not my God."

Firas, a 47-year-old farmer, told NBC he converted to Christianity after living under ISIS for two years. He recalled how militants would terrorize anyone who didn't adhere to their particular brand of Islam.

"I saw men and young teenagers being whipped on the streets because they were caught smoking. I saw dead bodies of young men being thrown from high buildings for being gay," Firas said. "This was their Islam."

"If heaven is made for ISIS and their belief, I would choose hell for myself instead of being again with them in the same place, even if it's paradise," he added.

While ISIS was driven out of the city, located along the Syrian-Turkish border, over four years ago, converting to Christianity remains taboo — and even dangerous — in the Muslim-majority region. Persecution watchdog Open Doors notes that even in more secure parts of Syria, Christians who have converted from Islam face pressure and discrimination from their communities. Kobani is home to about 300 Christians, according to estimates.

Omar, 38, who serves as church administrator, said that even before ISIS overtook the region, it was strictly forbidden to change religion from Islam to Christianity. But under ISIS, converting to Christianity "wasn't even imaginable," he said, adding: "ISIS would kill you immediately."

"Most of the brothers here converted or come to church as a result of what ISIS did to them and to their families," he said. "No one is forced to convert. Our weapon is the prayer, the spreading of spirit of love, brotherhood and tolerance."

In December, President Donald Trump announced that US troops would withdraw from Syria, stating, "We have won against ISIS. We've beaten them and we've beaten them badly. We've taken back the land and now it's time for our troops to come back home."

However, amid concerns that pulling U.S. troops out of Syria will put persecuted Christians, Kurds and other ethnic minorities at risk, Trump later clarified he would send U.S. forces back if ISIS and other terror groups regain their strength.

"The President's made clear that we support Christians, that we support the Kurds," White House Press Secretary Sarah Sanders recently told CBN News. "He's made that clear to Turkey, he's made that clear publicly on a number of fronts, and just one of the reasons that the President has been tough on Iran is to make sure that people don't feel threatened. We've supported the safe zones that are going to be very important, and the idea that the President is just stepping away and ignoring any potential problem doesn't understand the fundamental decision that he's made."