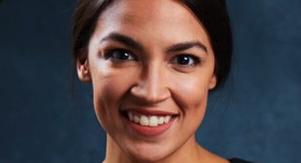 US Rep. Alexandria Ocasio-Cortez scrambled Sunday to explain why neighbors at her listed Bronx address never saw her there — and ended up claiming she recently relocated to a larger place nearby.

The day after The Post reported that residents said they had never seen her around — and she ducked questions about it after an appearance — her spokesman said the Democratic freshman congresswoman now lives with her boyfriend in a two-bedroom apartment “a block and a half away.’’

The pair relocated there earlier this month, he said.

“She lives in the same neighborhood she’s lived in for years,” said the spokesman, Corbin Trent. “She is not living in the exact same condo.’’

The recent move still didn’t explain why residents at her previous digs — a one-bedroom Bronx condo owned by her mom — insisted they had never seen her there.

US representatives and senators are required to have a residence in their home districts.

Trent claimed that Ocasio-Cortez, 29, was at her new home Sunday afternoon, although he wouldn’t give the address.

Ocasio-Cortez, a former bartender-turned-progressive pacesetter, ducked questions about her residence after an appearance Saturday in Queens. She told The Post to wait for her to pose for a photograph — then slipped out a back door and into a waiting SUV.

Ocasio-Cortez previously claimed that she has lived since 2011 in a mortgage-free, fourth-floor condo in Parkchester, which according to records was bought by her dad, Sergio Ocasio, who died in 2008.