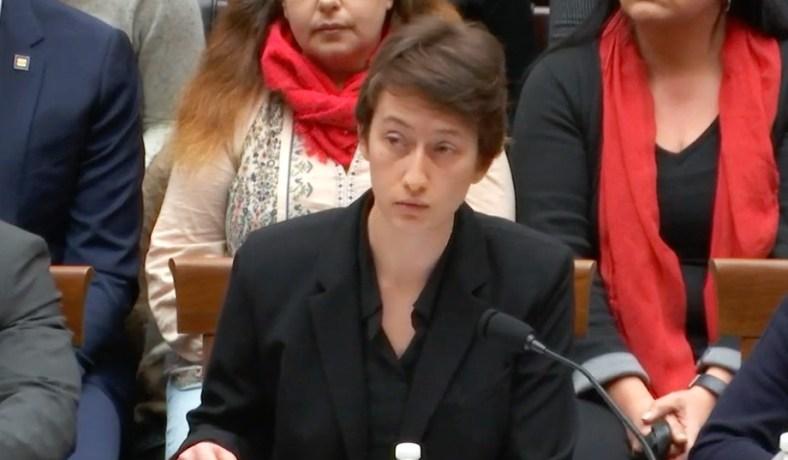 On Tuesday Julia Beck testified against the Equality Act (H.R. 5) before the House Judiciary Committee. Beck is a lesbian who was booted out of the Baltimore LGBT Commission for describing a male transgender rapist as a male and saying that men can’t be lesbians.

Advocates of the Equality Act characterize it as anti-discrimination for LGBT people and a much-needed extension of the 1964 Civil Rights Act. Nearly 300 Democrats (and a few Republicans) support the bill. It is scheduled for hearings later this spring, and a vote this summer. It will likely pass the House, if not yet the Senate.

In her testimony, Beck said the law would mean that,

male rapists will go to women’s prisons and likely assault female inmates as has already happened in the U.K.; female survivors of rape will be unable to contest male presence in women’s shelters; men will dominate women’s sports — girls who would have taken first place will be denied scholastic opportunity; women who use male pronouns to talk about men may be arrested, fined, and banned from social media platforms; girls will stay home from school when they have their periods to avoid harassment by boys in mixed-space toilets; girls and women will no longer have a right to ask for female medical staff or intimate care providers, including elderly or disabled women who are at serious risk of sexual abuse; female security officers will no longer have the right to refuse to perform pat-downs or intimate searches of males who say they’re female and women undergoing security checks will no longer have the right to refuse having those security checks being performed by men claiming a feminine identity.

She pointed out that “everything I just listed is already happening, and it’s only going to get worse if gender identity is recognized in federal law.” And added, “I urge my fellow Democrats to wake up. Please acknowledge biological reality.”

In an earlier interview, Beck told Tucker Carlson on Fox News, “I believe in the truth. I believe that people should have these conversations and say things that matter without fear of punishment.”

Today she stood up for beliefs that countless people hold.