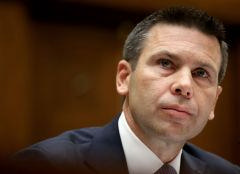 (CNSNews.com) - The number of border crossings have dropped by 43 percent since May, acting DHS Secretary Kevin McAleenan said Wednesday.

Furthermore, the number of illegal immigrants in custody at border stations has dropped from 20,000 in June to less than 4,000 as of today.

“So those efforts are making progress - 43% reduction in crossings since May. We're hoping to continue the progress in August. I’ll be going back to Central America next week to try to build on that with El Salvador and Panama and really address this problem as a regional effort,” he told “Fox & Friends” on Wednesday.

“On the first week of June, we had 20,000 people in custody in border stations. They're having a difficult time managing that overcrowding. This morning we have less than 4,000, and they're not staying with us very long. We're able to repatriate the single adults quickly. The unaccompanied children are going to a better situation with Health and Human Services,” McAleenan said.

Speaking about the recent attacks on ICE facilities across the country, the acting director said, “It does appear to be targeted, and again, as you just noted, this is the fourth incident of violence or an issue at an ICE facility, and our top priority is the safety of our men and women who are out there protecting American communities.

“I really appreciate the quick response of the FBI. The state and locals are going to be investigating this, but we got to find this perpetrator, and we’ve got to insure this can't happen again,” he said.

“I think the environment where we're demonizing law enforcement for doing their jobs, enforcing the laws on the books is concerning. It can be dangerous, and it can result in people taking actions that are not supported by the facts, that are not in response to anything inappropriate, that our men and women of ICE and enforcement removal operations are doing. I think we’ve got to tone that down, absolutely,” McAleenan said.