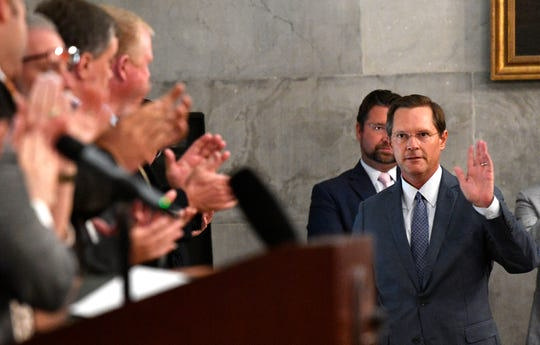 He was born in Lake City (now called Rocky Top) on Nov. 11, 1970. Folks who follow horoscopes might say that made him a Scorpio, but he definitely came into the world in an auspicious month of rising fortunes for the GOP in our Volunteer State.

Suddenly all three of Tennessee’s statewide elected officials were now Republicans, as Brock took his new seat in the U.S. Senate alongside Howard H. Baker Jr.

Sexton’s own family roots are deep in the center-right stream of Tennessee’s Republican politics over most of the past half-century. His relations included, by marriage, the Baker and John Duncan families in the Knoxville region.

Next Friday when the General Assembly convenes in an extraordinary session for the purpose of electing a new speaker, Sexton himself will become one of the top three officials of Tennessee state government, together with Gov. Bill Lee and Senate Speaker Randy McNally.

Officially, he must organize and manage a recently troubled House. Unofficially, he also becomes one of the highest-profile leaders of the Tennessee Republican Party as it looks to the 2020 election season.

I caught up with him in his Nashville office on Tuesday. We had not met before, so I was eager to learn more about his origins and his thoughts about the new job.

Sexton’s home in Crossville is up on the Cumberland Plateau. His House district covers all or parts of Cumberland, Van Buren and Putnam counties.

In this first visit, I was frankly less curious about his positions on certain hot-button issues — private-school vouchers or the chances for Medicaid expansion — than I was hoping to gauge his temperament, his basic approach to the speakership, his way of thinking broadly about government’s role and how best to find solutions.

Issues will come and go from session to session, whereas most legislative speakers have had extraordinary longevity over the past century. I wanted a glimpse of his longer view. After meeting him, I suspect Sexton could be the speaker for a long time.

We visited for an hour. He smiles easily and often. He comes across as thoughtful, methodical, articulate. He looked his visitor straight in the eye. He spoke without notes and dodged no questions

I noticed on his office bookshelf the busts of two U.S. presidents — Abraham Lincoln and John F. Kennedy — so we talked about the prospects for more bipartisan cooperation. (Sexton’s ousted predecessor did not practice it.) He recalled that in McNally’s 1994 state Senate campaign, Anderson and Campbell counties still voted Democratic.

Sexton also was a staffer to former Rep. Van Hilleary, Republican of West Tennessee, and worked in Hilleary’s 2002 run for governor. Hilleary lost only narrowly to Democrat Phil Bredesen.

“I’ve had some very good mentors in the people I’ve worked for, who did politics a little bit differently than how it’s done today,” Sexton told me. “I think I have a unique perspective — the family history, with the individuals I have worked for in politics. I’ve been called a pragmatic conservative. Sometimes we get too involved in trying to split apart and label people. ...

"When you’re fighting, there’s always a winner and a loser — sometimes you’re both losers. When you work towards a better agreement, a lot of times it comes out more of a win-win. There are times when you need to fight, I get that, but the first onus should not be towards fighting but to work out your differences.”

Sexton projects a mix of understatement and confidence, and he seems to value the role of bridge builder. Next Friday he will appoint new House committees and chairs. In our visit he did not rule out the possibility of naming one or more Democrats to committee leadership.

“Is it a given,” I asked, “that you will name only Republican chairs?”