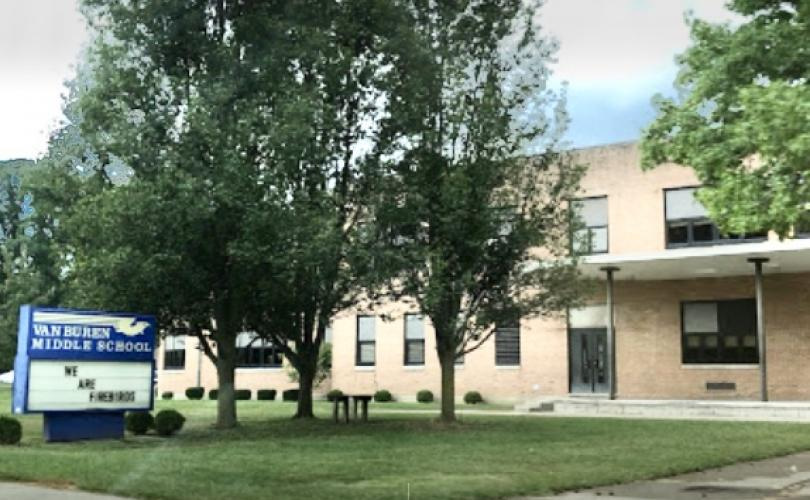 October 16, 2019 (LifeSiteNews) -- Most parents don’t like to be the last to know what’s being presented to their children, and Dayton, Ohio-area families were appalled to learn about a school-wide assembly held at a middle school.

No advance parental notice was given for this event held in conjunction with homosexual/transgender National Coming Out Day. As I have mentioned in previous articles, schools are regularly observing special days and weeks as part of a coordinated “LGBT” agenda directed to America’s children.

It all happened at Van Buren Middle School in Kettering, a Dayton suburb. An 11-year-old boy reported to his mom that a special speaker addressed the students. Actor/author Maulik Pancholy related his experience believing he was “gay” back in sixth grade and now encourages students to embrace their own homosexual feelings. He has written a book called The Best At It.

Pancholy was in the Dayton area as part of a tour promoting the book. Since he was also a voice on the popular Disney cartoon “Phineas and Ferb,” during his speech he told the Kettering middle school students that one of the Phineas’ characters was “gay.”

So is this school officially on board with destroying innocence while encouraging pre-adolescent corruption? This administration needs to be held accountable for mentally molesting these children while betraying the trust of their families.

And the mom in question is sounding the alarm. She emailed a number of other Van Buren families with this message:

“Sharing one's sexuality to 11-year-olds, many who aren't even thinking about sex, has absolutely no place in our publicly funded schools. Why did they think this was appropriate? And why did they think it was okay to teach our children without our knowledge or consent? And on top of that, use our tax money to teach our children beliefs we disagree with?

“If they were looking for diversity, there are numerous other authors they could have chosen from that didn't come with a clear LGBT agenda. I'm assuming when confronted the school will fall back on their ‘anti-bullying’ facade, which I find ironic when you consider what is defined as bullying.

“As is well known, anyone who disagrees with this agenda is instantly labeled with hateful rhetoric and name-calling such as ‘homophobic,’ ‘bigot,’ or ‘hate group/hate speech,’ certainly not what any child wants to be called. Nor does any child want to be singled out as hateful, when they're anything but that. (It's not hateful or bigoted just because you believe differently.)

“I would certainly call that intimidating! So, as the school hides behind the ‘anti-bullying’ facade to deceptively promote the LGBT agenda behind parents’ backs, it would appear by definition they are the big bullies here.”

Parents feel the betrayal keenly. And they should, because it goes beyond sexual corruption. It’s a violation of parental rights and it’s unconstitutional.

Schools have no right to assume that a pro-“LGBT” worldview is an appropriate official position for a public school, and an all-student assembly carries the implied endorsement of the school. Families who are Christian, Jewish, or Muslim are completely disregarded and disrespected by the assumption that affirmation of homosexuality and gender deviance is an acceptable message. It’s the establishment of one viewpoint while foolishly promoting a morally, spiritually and medically high-risk behavior.

“Coming Out Day” is on October 11 every year, established by the homosexual activist community because of its association with a “gay rights” march in Washington in 1987. It’s an activist day with a personal slant, encouraging people to declare “I’m here, I’m queer, get used to it.”

But when kids make this pronouncement, it puts them on a course that limits their lives and leads to higher risks all the way around. There’s an elevated risk of suicidal tendencies. There’s a risk of bodily harm through contracting HIV and other sexually transmitted diseases, because there’s a higher incidence of STDs, especially among males who have sex with other males. Centers for Disease Control statistics have well-established this medical risk.

The truth is that many adolescents who declare a homosexual or gender confused identity only have those feelings because they were sexually molested by an adult or older youth. And we are “blessing” such assaults by glorifying a “gay” identity, and even holding school assemblies to do so?

Every administrator who went along with this travesty should be fired. And then the school needs to have another assembly, inviting speakers who have left the homosexual life, and showing the real, living hope available for all students struggling with such attractions.

It’s the least Van Buren Middle School can do to make up for the damage that has already been done – corrupting children behind parents’ backs.