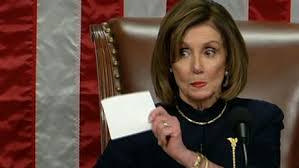 Nancy Pelosi refused to commit to sending Trump's articles of impeachment to the Senate, confirming House Democrats' true intentions are far from 'saving our democracy.'

House Speaker Nancy Pelosi would not commit to sending the articles of President Donald Trump’s impeachment to the Republican-controlled Senate, citing concerns about fairness.

“So far we haven’t seen anything that looks fair to us,” Pelosi said of Senate Republicans immediately after the Democrat-controlled House of Representatives voted to impeach Trump Wednesday evening. “I could not be prouder or more inspired than by the moral courage of the House Democrats,” she said.

House Democrats lodged two articles of impeachment against the president related to allegations that Trump sought Ukrainian interference in the upcoming presidential election and that he refused to cooperate with the ensuing House impeachment inquiry. The two articles alleged “abuse of power” and “obstruction of Congress,” and each passed in an overwhelmingly partisan vote.

All Republican House members voted against impeachment, with two Democrats voting against the first measure and three against the second. Democrat Tulsi Gabbard, a congresswoman from Hawaii and a 2020 presidential contender, voted present for both measures.

The House must now pass another resolution to establish formal managers who will present the impeachment case in the Senate. The articles of impeachment would officially transfer to the upper chamber with the passage of that resolution. Pelosi, however, has hinged moving forward with the resolution on Senate actions, making its passage contingent upon House Democratic leadership’s perception of Senate Republicans’ fairness.

“We cannot name managers until we see what the process is on the Senate side,” Pelosi declared. “Hopefully it will be fairer, and when we see what that is, we’ll send our managers.” 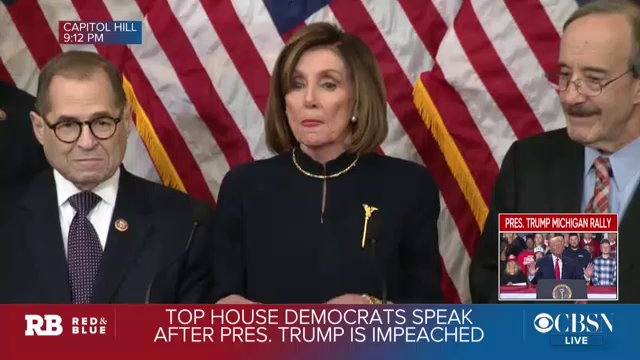 Pelosi went a step further, however, refusing to commit to sending the articles of impeachment to the Senate at all. When a reporter asked about the possibility of her never sending the articles, she promptly shut him down, and in so doing, also confirmed the impeachment vote had less to do with “protecting democracy” and more to do with partisan political games and 2020 election strategy.

We are not having that discussion. We have done what we have set out to do. The House has acted on a very sad day to protect and defend the Constitution of the United States, to do so in a way that was fair even though the other side was mischaracterizing it. Nonetheless, it was fair and appropriate — and urgent, and urgent. So we will make our decision as to when we’re going to send it when we see what they’re doing on the Senate side.

Sending the articles to the Senate “would have been our intention, but we’ll see what happens over there,” Pelosi then replied to a different reporter, undercutting her own appeals to urgency. 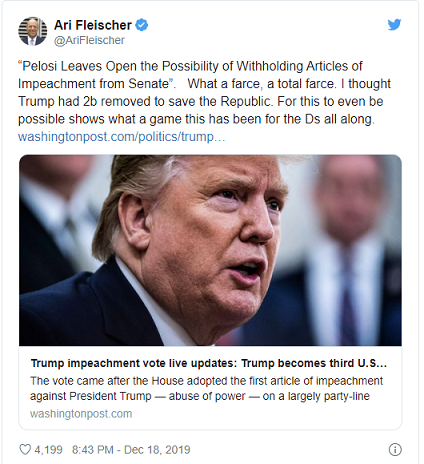 Pelosi’s remarks shed further light on House Democrats’ true intentions, which are seemingly to smear Trump with an “impeachment” brand as voters venture into a highly contentious election year. “We did all we could, Elijah,” Pelosi said, referring to the late Rep. Elijah Cummings. “We passed the two articles of impeachment. The president is impeached.”

If they send the articles of impeachment over to the Senate, Democratic lawmakers could ultimately end up with egg on their faces, a risky move heading into an election year — and a possibility Pelosi may well now be considering. For Trump is nearly guaranteed an acquittal in the Senate. For a president to be removed from office, the Constitution requires a two-thirds vote in the upper chamber, which would necessitate that 20 of the Senate’s 53 GOP members join Democrats in expelling a Republican president.

However, egg on one’s face seems a small price to pay for supposedly saving the republic and remaining, as Pelosi said, “very true to the vision of our founders.”

I view this day, this vote, as something that we did to honor the vision of our Founders to establish the republic, the sacrifice of our men and women in uniform to defend our democracy and that republic, and the aspirations of our children that they will always live in a democracy and that we have tried to do everything we can to make sure that that is their reality.

Really? Everything you can do? Or just a rubber stamp maneuver to smear the duly elected president, whom Democrats have promised to impeach since his 2016 election?

“Right now, the president is impeached,” Pelosi declared, striking the podium with each word.

I’ll let the speaker speak for herself.