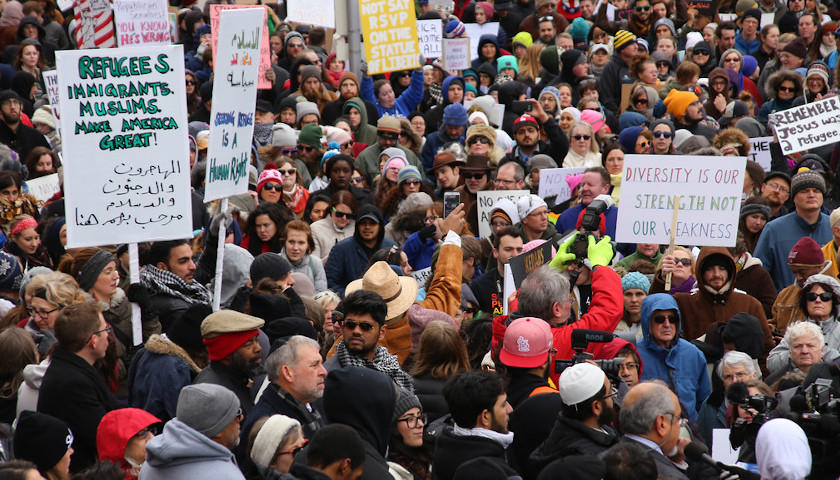 A new analysis finds that immigration will dramatically reshape the Electoral College map in favor of the Democratic Party after completion of the 2020 census.

Rising immigrant populations around the United States will result in several solidly Democratic states gaining more seats in the House of Representatives at the expense of solidly Republican states, the study by the Center for Immigration Studies finds. The shift ultimately will give the Democratic Party more influence in the Electoral College, CIS says.

As the 2020 census approaches, the Center for Immigration Studies conducted the study to predict what the Electoral College map will look like after the counting is done.

Under current policy, all individuals are included in the population count, regardless of citizenship or immigration status. Democrat-dominated states are expected to be bolstered with more congressional representation—thus giving them more influence in the Electoral College—thanks to their burgeoning immigrant populations.

Of the 26 seats predicted to shift, 24 are expected to be taken away from states that voted for Donald Trump in the 2016 election. Ohio is expected to lose three seats; Pennsylvania and Michigan likely will lose two; and 18 states likely will lose one seat: Arkansas, Alabama, Idaho, Georgia, Iowa, Indiana, Louisiana, Kentucky, Missouri, North Carolina, Mississippi, South Carolina, North Carolina, Oklahoma, Tennessee, Utah, Wisconsin, and West Virginia, according to the study.

California, already a behemoth of the Electoral College, is predicted to gain 11 seats after the 2020 census is completed. New York likely will gain four more seats. New Jersey likely will come out with two more seats, and Massachusetts and Illinois likely will each gain one more seat.

The only traditionally red state to see gains is Texas, which is expected to notch four more House seats. Florida, which is considered a swing state but trends toward the GOP, will earn three more seats, under the CIS analysis. Rhode Island and Minnesota are expected to lose one congressional district each.

“While it’s clear that American citizens in low-immigration states lose from mass immigration, the winners are not necessarily the non-citizens who cause the reapportionment, since they cannot vote or otherwise fully take part in the political process. Instead, it is citizens who live in the same districts with non-citizens whose political power is enhanced,” the authors of the CIS study concluded, adding:

Jason Hopkins is a reporter for the Daily Caller News Foundation.
Photo “Solidarity March with Immigrants” by Fibonacci Blue. CC BY 2.0.