NEWS
‹‹ Article in Harvard Law Journal concludes: The preborn child is a constitutional person
County Commissioners Say Bill Lee Was ‘Naive’ on Refugees and Should Have Talked to Legislature First ›› 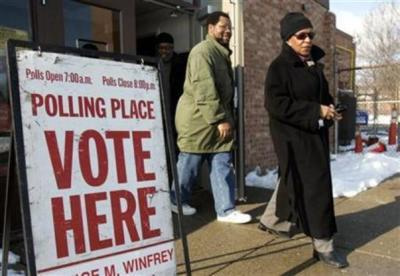 Elections
For Christians, Voting Is Not an Option. It Is a Divine Calling.

The midterm elections has Christians in churches throughout America once again considering what their faith teaches about cultural and political engagement, and how their beliefs should influence how they vote.

The gospel is a holistic message with implications for all areas of life, including how Christians are called to engage the political process.

This was a point understood by key figures in the twentieth century, including German pastor and theologian Dietrich Bonhoeffer, who advocated for the church's active engagement in politics. Four years before he was executed by the Nazis, he wrote, "A theologically correct Christian proclamation is not enough; neither are general ethical principles. What is necessary is a concrete directive in the concrete situation."

During the civil rights movement of the 1960s, Rev. Martin Luther King Jr. founded the Southern Christian Leadership Conference (SCLC) to activate the church in combating racial injustices that had long been ignored. It made no sense that those who professed belief in human dignity and equality should stay silent any longer. But many churches did, and King encountered much resistance from white churches who did not see systemic racial injustice as a matter that the church should get involved with.

To not repeat the failure of inaction by many white evangelical churches, the moral majority in the 1980s brought together a group of evangelicals from all denominations to confront the culture with God's Word and mobilize Christians to support likeminded candidates who would work to confront and undo cultural injustices.

As before, evangelicals are confronted with a moment of decision in 2018.

While some churches are still sitting silent on issues facing our culture, we believe the predominant question facing our churches today is not whether we should be involved in engaging the culture, but rather what does faithful Christian political engagement look like?

Today, Christians are inundated with resources on "how to think about (fill in the blank) as a Christian." However, many of the teachers producing these resources seem to look down on political activism that supports the very thing discussed in their "how a Christian should think about (fill in the blank)!" For them, political activism is somehow a bridge too far, and Christians who do this have stepped over the bounds into "idolatry."

Neither extreme—political withdrawal (while we wait for the perfect party or candidate) or idolatry of country—is acceptable. Both must be avoided.

In short, we need a model that is holistic and contextual.

It's not enough to train our members to be theological intellectuals yet leave them in the dark when it comes to putting their faith into action (James 2:7).

For example, how can we teach Christians to think rightly about human dignity and teach them to connect concepts such as "imago dei" with abortion but fail to train them on how to support candidates who would work to end the practice?

In the context of American politics, voting is a practical application of a biblical worldview. This is seen when our ability to participate in the democratic process is placed alongside Paul's teaching in Romans 13, where the apostle teaches that government is ordained by God to promote good and restrain evil. In America, because ultimate sovereignty resides with the people, voting is essentially the delegation of authority. For Christians, this means suffrage is inherently a matter of stewardship.

For Christians, applying our worldview in politics is a double-edged sword. We can meet the practical needs of people through our soup kitchens (poverty), pregnancy centers (life), the celebration of recoveries (pornography, drugs, addictions), and counseling (marriage, sexuality, family), while at the same time advocate for principles that foster an environment conducive for robust human flourishing. It's not an either/or scenario, but rather a both/and one. Our efforts to meet tangible needs can go together with political activism. The two can work together to display the glory and justice of God. Love for our neighbor requires nothing less—political activism is just a tool that puts that love into action.

Satan is out to steal, kill, and destroy and is using every tool and method to do it.

Therefore, we must use every resource at our disposal to impact our neighbors for the glory of God.

These midterm elections are full of candidates who will promote just or unjust policies. As citizens of heaven, how are we being faithful with the responsibilities and privileges God has given us in the city of man? Because of our unprecedented political freedom in America, Christians will be held to a high standard of accountability before God.

This is why we must engage the culture from a holistic biblical worldview.

To see and distribute our voter guides, go here. To find out how to establish a Culture Impact Team (CIT) in your church, go here.