NEWS
‹‹ Why Christian parents need to be extra careful about what shows their kids in quarantine watch
Harvard Law School Calls for Ban on Homeschooling; Homeschooled Harvard Graduate On Why This is Wrong ›› 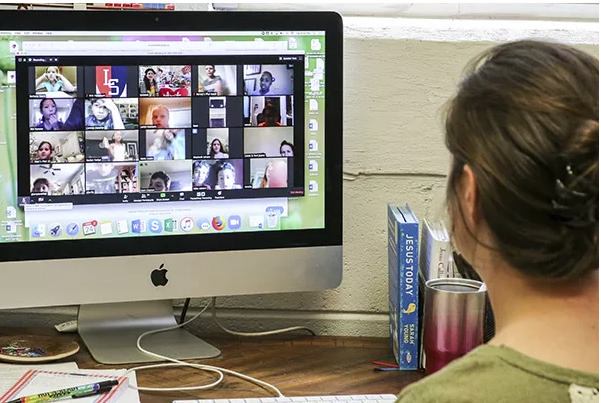 Zoom
Zoom Use Skyrockets During Coronavirus Pandemic, Prompting Wave of Problems for Schools

Erin Honeycutt, the principal of Lamar Elementary School in Meridian, Miss., sets up a “Zoom” class for 1st through 5th graders to run an art lesson online. —Paula Merritt/The Meridian Star via AP

For many K-12 educators, Zoom only entered the lexicon a few weeks ago, as the coronavirus outbreak shut down schools nationwide. Already, it’s taken on a lot of baggage.

Schools across the country are evaluating their engagement with Zoom, with decisions varying from place to place. Some districts have discouraged teachers from using it, or banned it altogether. Others are taking a more cautious approach, exploring its potential while sticking with tools they had already vetted more thoroughly prior to the nationwide shutdown.

The videoconferencing platform allows teachers to communicate with students and collaborate with colleagues virtually and in large groups. It’s proved enticing in many workplaces and homes across the country, and the company’s CEO last month lifted the 40-minute conference time limits for its free service to all K-12 schools.

But the rapid increase of users has also led to increased scrutiny of the privacy and security limitations that come with using the platform, especially without taking necessary precautions. The relatively new phenomenon of Zoombombing—in which a hacker infiltrates a chat and shares offensive or harmful content— has exposed many classrooms and school board meetings to unwelcome and offensive content.

The company has attracted ire from privacy advocates as well as public officials, including U.S. Senator Richard Blumenthal of Connecticut and several state attorneys general, who wrote letters to the Zoom CEO requesting details on information the company stores and steps it’s taken to minimize risks to users. One user filed a class-action lawsuit on Monday over the company’s alleged data-sharing with Facebook

Zoom has in recent days updated its privacy policy and suspended all engineering efforts on new products to focus on addressing issues raised by the surge of new users, including 90,000 schools in 20 countries. The company’s customer service team has been overwhelmed by requests for support, according to the Wall Street Journal.

The FBI has even gotten involved, issuing a warning after a hacker infiltrated a Massachusetts high school Zoom meeting shouting profanities and the teacher’s home address, and another Massachusetts school reported a classroom meeting interrupted by a person displaying swastika tattoos.

‘We Shut It Down Pretty Quick’

Fairfax County public schools in Virginia has existing contracts with Google’s education suite and Blackboard Collaborate, both of which include videoconference platforms. As a result, the district has not approved Zoom for teachers or staff to use, said Maribeth Luftglass, chief information officer and assistant superintendent of information technology.

Some teachers started using it anyway amid the chaos of the pandemic. “We shut it down pretty quick when we found out about it,” Luftglass said—though some teachers were frustrated because they had already gotten comfortable with it.

Without a Zoom contract, the district can’t ensure that students’ data won’t be sold or shared improperly. Streamlining the number of new tech platforms also reduces the strain on the district’s IT help desk, which has already had to field a few Zoom questions.

In response, Luftglass has been circulating a two-minute video tutorial for Blackboard Collaborate. “We don’t just say, OK, use whatever you want,” Luftglass said. “We say, ‘We’re happy to train you, here’s a quick tutorial, feel free to sign up for a more indepth class if you want to.’”

Sticking to district-sanctioned platforms could be critical: Law enforcement officials in Orange County, Fla., are investigating a case of a man who exposed himself after hacking into an online public school class conducted on Zoom, an application not supported by the district, according to the Associated Press.

When it comes to videoconferencing, many educators are starting from scratch. The Sitka school district, which stretches 14 miles on an island near the water in Alaska, had never had a need for virtual conferences—all of its schools are within five minutes of each other, said Mary Wegner, the district’s superintendent.

Her district has a subscription to Microsoft Teams, though individual teachers tested other platforms at first, Wegner said. She reeled them in by hosting a 177-member staff meeting on Teams during the spring break week before instruction was set to resume.

“That turned out to be a real saving grace for us, because otherwise people would have been only using Zoom,” Wegner said. A recent school board meeting got interrupted by a Zoombombing instance, and she’s wary of the platform after reading media reports of privacy concerns.

Zoombombing takes place when an uninvited person infiltrates a group video chat, often via a link that’s been shared publicly, and shares offensive content, such as racist imagery, pornography, and hate speech, as well as some disruptive but inoffensive jokes. Some instances are part of a coordinated effort among online trolls, including teenagers, trying to sow chaos, according to reports in the New York Times and Inside Higher Ed.

According to the Times report, in one online chat, “a middle school’s class schedule, including Zoom links for each class, was shared with hundreds of members who stated their intent to harass the students and their teachers.” One 16-year-old hacker told the Times, “Part of the reason we do it is a lot of teachers give us a lot of work right now.”

A blog post on Zoom’s website recommends generating new meeting ID numbers for each new session, and creating “waiting rooms” that allow conference hosts to approve attendees who request access. Users can also set up two-factor authentication, disable private chat, and lock meetings when they start, just as you would “your front door.”

In at least a few cases, hacking issues have led to schools prohibiting Zoom. Clark County public schools in Nevada “made the decision to disable access to Zoom out of an abundance of caution” in response to hacking incidents in virtual classrooms, a district spokesperson said. The district is “looking at options to strengthen security precautions to potentially reopen access.”

The Conejo Valley Unified School District in California is taking precautions after a school board meeting was Zoombombed last month. Teachers there have been asked to require attendees to give permission before sharing their screen; to only share login information with students and families; and to allow meeting attendees the option to disable chat and file transfer options.

Zoom also presents logistical challenges some districts have decided to simply avoid. For a district already set up with Chromebooks, having each person sign up for an individual account didn’t seem feasible, said Rolland Kornblau, director of information technology for the El Rancho Unified school district in California. “We really couldn’t administer it, it wasn’t under our control,” he said.

Still in Widespread Use

Plenty of educators are still using Zoom, though.

The School District of La Crosse in Wisconsin had a prior contract with Google’s education suite and videoconference platform, but teachers got interested in Zoom, prompting the district’s tech team to do a “research dive,” said Michael St. Pierre, director of technology.

Teachers liked being able to display two people’s screens at the same time, and to save chat transcripts and audio/video recordings for later use. With Google Hangouts, “they’d have to copy the chat message before they closed out just to keep a record of it,” St. Pierre said.

With help from the member forums of the Consortium for School Networking, St. Pierre helped kickstart the process for an ongoing statewide evaluation of Zoom for educational use in Wisconsin. In the meantime, the district has mainly used Zoom for staff-to-staff interactions, St. Pierre said.

Some of the features Zoom offers can be tricky to navigate for ensuring students’ safety. Many teachers want to take advantage of the Zoom feature that allows for recording conversations and saving chat transcripts so students can refer to them later.

“Think of this as a camera in the classroom. Don’t rush to change what you would ordinarily do just because you would have the technology,” Attai said.

Recorded videoconferences can also be a safeguard against inappropriate behavior, though. Kornblau’s district is urging educators to record sessions, particularly those between a teacher and a single student, so they have a record of anything troubling.

The FBI is urging educators who encounter Zoombombing to file a complaint with its Internet Crime Complaint Center. Attai is advising districts to share protocols for reporting Zoombombing incidents and other related challenges with instructors before an incident happens.

Her advice in the meantime: “Remove the person from the participant list, and if you can't, close the session. Report it immediately to your technology team, and follow their instructions for how to get back in touch with your students securely as soon as possible to reassure them and discuss what happened.”

Megan Mullaly, a 6th grade teacher at Dartmouth Middle School in Massachusetts, got more than 1,300 retweets on a Zoom guide for educators she wrote herself, with tips like turning off private chats students can join without teachers, and exploring settings like “chime upon entry” and “mute all.” Other tips on preventing Zoombombing are available in guides from the Consortium for School Networking, the Anti-Defamation League and the Berkeley Information Security Office.

What’s in the Background

Videoconferencing raises other platform-agnostic issues as well. Parents who consent to their students participating in class on video need to be mindful that other students and the teacher will be able to see what’s in the background, Attai said.

The “Brady Bunch” display of participants in a conference call can be off-putting and anxiety-inducing for some students. Attai said she’s also seen some educators tweeting screengrabs from video chats with students. Some schools have allowed that practice as long as students involved signed a media release form, but Attai thinks districts shouldn’t even be doing that.

“A media release is to give permission for a picture of a child to publish a story about, ‘Here’s who kicked a winning field goal,’ not, ‘Here’s a look at our classroom,’” Attai said. “There’s no educational purpose for that for students.”

Districts can embed any videoconferencing platform within a password-protected student portal, said Scott Gallant, a consultant for Keyed Systems, who works on privacy and data governance in education.

He recommends that districts identify a single videoconference tool that everyone should use, and that teachers maintain professional surroundings and behavior while on camera to set an example for students.

Gallant thinks it’s important to keep in mind the pressure that educators and families are under, not just to teach and learn but to navigate an unprecedented global health crisis. Videoconference tools ultimately are a vessel that facilitates connections between people through face-to-face communication.

“We need to focus more on what we’re getting back from those cues from students,” he said.