NEWS
‹‹ Rep. Dan Crenshaw and GOP Senator Tom Cotton want to strike back at China’s wallet
Why Christian parents need to be extra careful about what shows their kids in quarantine watch ›› 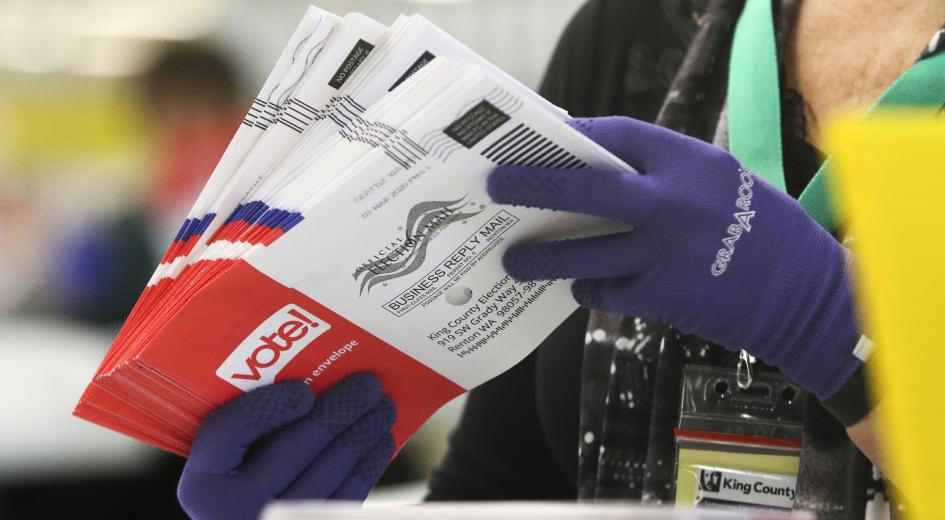 The president is right to be worried about elections conducted entirely by mail.

Going entirely to by-mail elections would unwisely endanger the security and integrity of the election process.

States should be doing everything they can to help everyone who is eligible to vote. But that doesn’t mean casting aside the safeguards in place.

Twice the usual number of suspects, including CNN’s combative Jim Acosta, have been criticizing President Donald Trump for the concerns he has raised about elections conducted entirely by mail.

As the president said in a tweet, we do need absentee ballots for “many senior citizens, military, and others who can’t get to the polls on Election Day.” But the president is right to be worried about elections conducted entirely by mail.

Absentee ballots are the tools of choice of election fraudsters because they are voted outside the supervision of election officials, making it easier to steal, forge, or alter them, as well as to intimidate voters.

Going entirely to by-mail elections would unwisely endanger the security and integrity of the election process, particularly if officials automatically mail absentee ballots to all registered voters without a signed, authenticated request from each voter.

Voter registration rolls are notoriously inaccurate and out of date, containing the names of voters who are deceased, have moved, or otherwise have become ineligible.

Having thousands of ballots arriving in the mail for individuals who no longer reside at a registered address risks those ballots being stolen and voted.

Yet many liberals are pushing that very process.

The coronavirus bill that House Speaker Nancy Pelosi, D-Calif., tried to pass would have forced states to mail absentee ballots to all registered voters, rather than allowing states to require a signed, absentee ballot request form that can be authenticated by election officials before a ballot is sent to the voter.

The problem (and opportunity for fraud) this could cause is illustrated by something the president talked about at one of his news conferences; namely, the settlement that Judicial Watch obtained from Los Angeles and the state of California over their failure to maintain the accuracy of their voter registration rolls.

Ballots are a valuable commodity. How many would have been voted anyway by fraudsters or vote harvesters collecting absentee ballots in neighborhoods throughout Los Angeles?

Just look at what happened in North Carolina in 2018 in the 9th Congressional District race, in which the result was overturned by the state election board because of illegal vote harvesting that included altering and forging absentee ballots.

All-mail jurisdictions such as Oregon like to brag about the supposed “security” of their systems, which consists of almost nothing other than a rapid, superficial signature comparison.

As Melody Rose, an assistant professor of political science at Portland State University, told the Los Angeles Times: “I don’t have much faith in that process. I can forge my husband’s signature perfectly.”

Rose conducted a survey of one county, Washington County, outside Portland. Five percent of registered voters admitted that other people marked their ballots, and 2.4% said someone else signed their ballots.

Rose suspected the actual number was higher, given that most people would not want to admit to being “party to a crime.” That would mean that tens of thousands of mail-in ballots are being cast in Oregon by individuals other than the registered voter.

Trump was also right when he said we need voter ID laws as a basic security measure in voting. As for those who say there is no election fraud in the U.S. that we need be concerned about, they are wrong and the president is right.

As the U.S. Supreme Court said in 2008 when it upheld Indiana’s voter ID law:

flagrant examples of such fraud … have been documented throughout this Nation’s history by respected historians and journalists [including] Indiana’s own experience with fraudulent voting in the 2003 Democratic primary for East Chicago Mayor … demonstrate that not only is the risk of voter fraud real, but that it could affect the outcome of a close election.

The Heritage Foundation’s Election Fraud Database documents almost 1,300 proven instances of fraud, including numerous cases of absentee ballot fraud. That fraud often targets the most vulnerable voters, including the elderly and the poor.

The most recent batch of cases added to the database emphasize that the president’s concern over election integrity is not misplaced.

For example, Richard Davis was convicted of a felony in California after registering his four dogs to vote as Democrats over a four-year period. Davis said his goal was to draw attention to the flawed voter registration system in his state, and he did notify the local district attorney’s office of what he was doing.

Disregarding several warnings to stop those false registrations, and after registering his deceased father, too, Davis was charged and pleaded guilty to voter registration fraud.

He never submitted a fraudulent vote, but he could have done so easily using absentee ballots if he hadn’t told officials what he was doing, since his “signature” for his dogs would have been a match on all of the forms.

Or take Gustavo Araujo Lerma, an illegal alien from Mexico. He voted multiple times in elections in Sacramento, California, under a false identity.

Another case out of California demonstrates how voter fraud often hurts the most marginalized individuals in communities.

Norman Hall was involved in a scheme with eight other individuals involving the homeless on Skid Row. According to the Los Angeles District Attorney’s Office, they “solicited hundreds of false and/or forged signatures on state ballot petitions and voter registration forms by offering homeless people $1 and/or cigarettes for their participation.”

The ballot petitions for which Hall and others gathered fraudulent signatures included calling for reducing jail time, changing the authority of the sheriff’s office, and increasing taxes on millionaires and other business owners.

Two other cases out of California include two individuals, Jentry and Bradley Jasperson, who forged the signatures of voters for a referendum initiative. They were each paid $5 per signature.

Another case from our newest batch features Frank Rabia, a City Council candidate in Hoboken, New Jersey, who bribed voters with $50 payments for mail-in ballots to support his candidacy.

Heritage’s Election Fraud Database has more than 60 instances of vote buying. Attempting to buy votes or signatures is entirely repugnant to the republic that America is so lucky to maintain. But purchasing votes is much easier with absentee or mail-in ballots.

The purchaser—such as Rabia—can see the voter’s absentee ballot in the voter’s home and ensure he is getting what he paid for. A purchaser can’t do that when a voter goes into the privacy of a voting booth.

Another new case we added to our database arises out of Espanola, New Mexico, where Laura Seeds and Dyon Herrera falsified absentee ballots in favor of Seeds’ husband, a Democratic candidate for City Council.

This is the same state where a lawsuit has been filed to require election officials to automatically mail absentee ballots to all registered voters in the upcoming election.

The Public Interest Legal Foundation pointed out in an amicus brief that it found more than 3,000 individuals registered multiple times in New Mexico; almost 1,700 registrants who are dead; 1,500 voters aged 100 or above (64 of whom are over 120 years old); and almost 200 individuals registered at commercial rather than residential addresses. All of these supposed voters would receive ballots automatically if the lawsuit were  successful.

These cases demonstrate that election fraud does occur and can compromise the integrity of the election process.

Not even the coronavirus can stop the upcoming presidential election, with the 2020 primaries already well underway. Soon enough, the general election will be upon us.

States should be doing everything they can to help everyone who is eligible to vote. But that doesn’t mean casting aside the safeguards in place to prevent elections from being stolen or compromised by administrative errors and fraud.

This piece originally appeared in The Daily Signal