Riots and destruction
Who Speaks for the Riots' Victims?

How many homes have been destroyed in the riots of the past weeks? How many businesses?

How many Americans have died in the riots that began out of justified and peaceful protests over the killing of George Floyd?

How many homes have been destroyed in the riots of the past weeks? How many businesses?

How many Americans have died in the riots that began out of justified and peaceful protests over the killing of George Floyd?

My colleague Tyler O’Neill highlighted two of them in this piece. Their names are Princess Pope, of Dallas, and K. B. Balla, of Minneapolis. Looters burned Balla’s sports bar, which he built using his life’s savings, to the ground. And then they ran off, presumably to burn someone else’s life down.

Pope makes a distinction too many politicians and the national media have failed to make. Peaceful protest is thoroughly American and is protected in the First Amendment. Rioting and looting are criminal activity, often done opportunistically while others peacefully protest for justice and police and engaged in protecting them.

K. B. Balla worked his whole adult life to get to the point where he could open his bar, but rioters destroyed his dream in minutes. Both of these victims of the looters and rioters are black. Princess Pope spent years building her Guns and Roses Boutique, only to see it looted and destroyed in minutes. 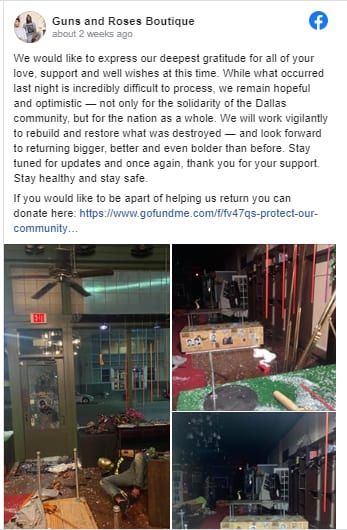 Riots destroyed Princess Pope’s Dallas boutique, but the community is coming together to save it. 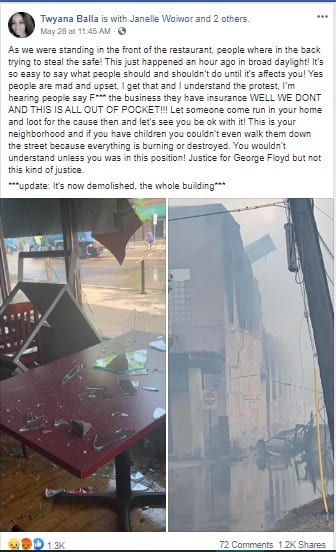 Riots destroyed KB Balla’s bar. He built it with his life’s savings.

There are many victims beyond these two. They have names and faces, they have families. They’re in every major city in the country. They did nothing to warrant the violence and injustice done to them by rioters and looters.

Google “number killed 2020 riots George Floyd.” Other than a lone report from a local Fox affiliate, there isn’t much. That report has not been updated in several days. But it does list more than 20 Americans who have died because of the riots.

These are their names: David Dorn. David McAttee. Chris Beaty. Dorian Murell. Italia Kelly. Marquis Tousant. Patrick Underwood. Calvin Horton Jr. James Scurlock. Javar Harrell. Barry Perkins III. Jorge Gomez. Jose Gutierrez. Victor Cazares Jr. Marvin Francois. And there are two additional victims who as of the time or writing have not been identified. The youngest was athlete Dorian Murrell, 18; the oldest was retired police captain David Dorn, 77. Dorn was guarding his store when rioters broke in, killed him, and looted it. All of these victims were minorities, and most were black.

Patrick Underwood was a career law enforcement officer. He died literally guarding the rule of law.

“Pat was guarding the federal courthouse, a symbol of equal justice and the rule of law. During the riots in Oakland on the night of his death, it appears his death was part of a targeted attack on federal law enforcement,” Rep. Kevin McCarthy said at Underwood’s funeral.

“We pray that justice comes swiftly and completely for Pat, for George Floyd, and all victims of violence.”

But the media, along with most of the nation, is silent about these. If silence is truly violence, what does the media’s silence say to these victims and their families? The New York Times used its Memorial Day issue to print the names of 1,000 Americans killed by a mindless virus. It is ignoring the victims of the George Floyd riots.

There are many other victims. Right now a six-block section of Seattle is under the control of extremists calling the area the Capitol Hill Autonomous Zone, or CHAZ. There are 500 homes within the area the city and state have ceded to the extremists. There are businesses and jobs in that area. They’re all victims who have been left without a voice. CHAZ is under the control of an armed insurrectionist strongman who is extorting money from residents and businesses trying to continue their operations to keep their employees paid.

Who can they count on? Democratic governors and mayors have ceded their homes to extremists. Democratic candidates like Kim Olson in Texas say that “If people loot, so what. Burn it to the ground if that’s what it takes to fix our country.”

Those are Americans’ homes and their dreams and their lives. They deserve better than callous dismissal from the likes of Olson and the national media.

Thankfully both Balla and Pope will have their businesses restored. Their communities have come together, and Pope has a GoFundme and is working with local Vista Bank to get back to business. The Dallas Black Chamber of Commerce is also working with local First United Bank to help Pope and other Dallas victims of the riots including Coffney M Salon and BurgerIM. Those links go to their respective GoFundMe pages.

“We recognize how hard it is to build a small business and we are honored to play a small part in helping her come back from this,” Vista Bank President John D. Steinmetz said.

“First United Bank has been instrumental in helping the Black-owned businesses the Dallas Black Chamber of Commerce sent during COVID-19 and now is no different. We appreciate their support to businesses in our communities across North Texas,” DBCC President Harrison Blair says.

Balla, a former firefighter, has raised over a million dollars to rebuild his bar, another case of Americans coming together to restore what was all too easy to destroy.

Neither Pope nor Balla sound like victims. They both sound like overcomers. They will thrive and hopefully pull many up with them.

“Dr. Martin Luther King Jr. preached, always avoid violence,” she said. “If you succumb to the temptation of using violence in your struggle, unborn generations will be recipients of a long and desolate night of bitterness, and your chief legacy to the future will be an endless reign of meaningless chaos.”

The national media could do good by focusing on these stories and relentlessly drawing distinctions between the peaceful protesters and the violent rioters. The former seek justice for a fellow American. The latter are nihilists who want to destroy the country and they do not care what and who they have to destroy along the way.

For more information and other articles go here: