If you value a robust media offering a variety of voices, you should be troubled by a chilling incident that occurred this week.

Citing the work of two foreign-based activist groups, NBC News reported Tuesday that Google would demonetize a conservative news and opinion outlet, The Federalist–meaning not allow it to carry Google Ads on its site.

Why? Because of The Federalist’s coverage of the George Floyd protests.

This episode shows how a media outlet such as NBC News apparently is willing to collude with radicals alongside one of the world’s most powerful tech companies to ruin the competition.

“Google’s ban of the websites [The Federalist and financial blog ZeroHedge] comes after the company was notified of research conducted by the Center for Countering Digital Hate, a British nonprofit that combats online hate and misinformation,” NBC initially reported, according to Fox News. “They found that 10 U.S-based websites have published what they say are racist articles about the [Floyd/ Black Lives Matter] protests, and projected that the websites would make millions of dollars through Google Ads.”

NBC worked with two left-wing advocacy organizations as sources in its reporting: the Center for Countering Digital Hate and Stop Funding Fake News.

NBC reported that Google blocked The Federalist from its advertising platform after NBC brought the project to its attention. The tech giant already had demonetized ZeroHedge, it reported.

“When a page or site violates our policies, we take action,” an unnamed Google spokesman told NBC. “In this case, we’ve removed both sites’ ability to monetize with Google.”

Shortly after NBC published its article, Google denied demonetizing The Federalist. Google said the issue was that The Federalist’s comments section, maintained by a third party, paired Google Ads with “dangerous or derogatory content” there.

Google said nothing about The Federalist’s articles, as NBC initially claimed in its report, which was changed significantly—although not retracted—after publication.

And although The Federalist removed the comments section below the pieces on its website, founders Ben Domenech and Sean Davis vow to bring back comments.

For full disclosure, I have written for The Federalist and my wife, Inez Stepman, is a senior contributor at the publication.

Unfortunately, the issues involved in this story are much bigger than a single NBC report.

The reporter who wrote the story, London-based Adele-Momoko Fraser, did little to hide the fact that she worked in “collaboration”—her words in a now-deleted tweet—with far-left groups.

Later, Fraser changed her tune and said on Twitter that she obtained her research “exclusively” from Stop Funding Fake News, but didn’t “collaborate” with them.

Regardless of what actually happened, this is deeply troubling.

Unfortunately, it’s unlikely that these brute-force tactics to curb speech will end here. Far from it.

I wrote in 2018 how YouTube—which is owned by Google—partnered with the Southern Poverty Law Center to police content under YouTube’s “trusted flagger program.”

The SPLC is notorious for making wild and exaggerated claims about mainstream conservative organizations, lumping them in as “hate groups” with extremist groups such as the Ku Klux Klan.

Rob Bluey, vice president for communications at The Heritage Foundation and executive editor of The Daily Signal, criticized the actions of NBC and Google and said all Americans should be appalled.

This whole episode has disturbing implications for the free exchange of ideas in America, where the “cancel culture” of college campuses has been injected into the mainstream of our national political discourse.

The Federalist successfully fought back. But as noted by its  founders, could they have done so if they didn’t already have a significant public megaphone?

In a commentary published by The Wall Street Journal, Domenech and Davis lambaste what they call an attack “not only individuals but free speech itself”:

NBC News colluded with a foreign left-wing group [Stop Funding Fake News] in an attempt to destroy us because it disagrees with our political commentary and media criticism. The episode illustrates how dangerous the combination of partisan media and monopolistic tech companies is to America. We survived the attack because our organization is well known.

NBC’s failed attempt at bullying The Federalist is just another example of how social justice warriors have taken hold of newsrooms, using the immense power of their positions to squash voices that dare to contest the all-important “narrative.”

It’s the narrative, rather than pursuit of the truth, that’s been prioritized.

Activists on the far left want to control how and what people think. Dissent is problematic; debate ensures that not everyone will come to the “correct” conclusions.

My colleague Mike Gonzalez, author of the forthcoming book “The Plot to Change America: How Identity Politics is Dividing the Land of the Free,” recently wrote that the far left is manipulating language and using activists in media institutions “to make it impossible for conservatives to openly discuss their policy remedies to the ills besetting society.”

If this trend continues unabated, we will lose our grip on our culture of free speech—and our free society along with it.

A Note for our Readers: 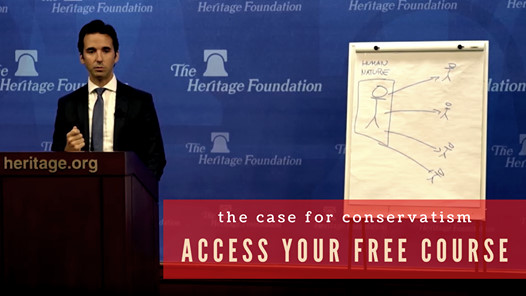 These are trying times in our nation’s history. Two regimes are fighting an ideological war in America today, with polar opposite viewpoints on public policy and the government’s role in our lives.

Our friends at The Heritage Foundation asked world-class speaker, educator, and researcher David Azerrad to walk you through his research and outline the differences between the “two regimes” in our society today—conservatism and progressivism—and their primary differences.

When you get access to this course today, you’ll learn key takeaways like what it means to be a conservative, what “modern progressivism” is, how a conservative worldview differs from a progressive one, and much, much more.

You will come away from this online course with a better understanding of the differing points of view, how they align with your principles, and how to defend your beliefs.