NEWS
‹‹ ‘I Plead With You, Back Off’: California Church Fined Thousands For Meeting In-Person And Singing
In your face: BLM activists force diners to raise fists in solidarity ›› 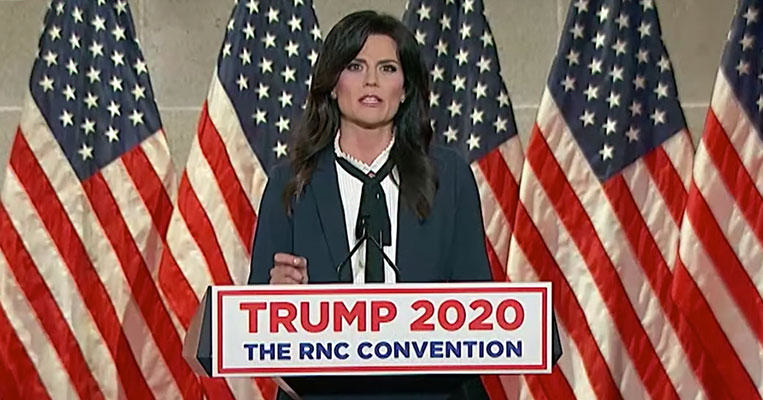 Elections
No Canceling Strong Voices at the RNC

On night two of the Republican National Convention, it wasn't just the contrast in two parties that was on display -- but the contrast of two medias. Networks like CNN, probably furious to see the RNC blow away the DNC's ratings, dripped with animosity for speakers like teenager Nick Sandmann, calling him a "snot-nosed, entitled kid from Kentucky." But that was almost kind compared to the "token minority" label the Daily Beast slapped on rising star Daniel Cameron. Then came the bogus fact checks, which the press bypassed for most of the DNC event because, as Chris Cuomo put it, Democrats "don't lie like Trump."

But for every bitter roundtable, every biting comment, all the over-the-top spin, conservatives proved they could dish it right back. Nick, who's had "the full war machine of the mainstream media" pointed directly at him, knows the real problem in the press is that the truth isn't important. "Advancing their anti-Christian, anti-Conservative, anti-Donald Trump narrative was all that mattered." "Canceled," he warned, "is what's happening to people around this country who refuse to be silenced by the far Left," the 18-year-old said. "But I wouldn't be canceled."

Others, like Cissie Graham Lynch, dared to challenge the Democrats' godless agenda. "During the Obama-Biden administration, [our] freedoms were under attack," she warned. "Democrats tried to make faith organizations pay for abortion-inducing drugs. Democrats tried to force adoption agencies to violate their deeply held beliefs. Democrats pressured schools to allow boys to compete in girls' sports and use girls' locker rooms." The Biden-Harris vision, she insisted, will be worse. It "leaves no room for people of faith, whether you are a baker, or a florist or a football coach. They will force the choice between being obedient to God or to Caesar," she added. "Because the radical Left's God is government power."

Almost immediately, the media and far-Left allies let loose. Headlines like NBC's declared that "Cissie Graham Lynch Attacks Transgender Rights" -- a far cry from what reporters at the Washington Times heard: "Billy Graham's Granddaughter Lauds Trump on Religious Freedom." The Human Rights Campaign accused her of being "dehumanizing" and "demeaning" for referring to them as boys using the restroom and not "transgender girls." "There were no efforts to 'pressure schools'" into changing their bathroom policies, NBC lied -- conveniently ignoring the 2016 mandate that cut federal funds for non-compliers.

It's no wonder the media was racing to discredit everything Cissie said. It was a powerful speech that pulled back the curtain on the Left's best kept secret: how they plan to destroy America once they control it. Even Politico has been stunned at just how intentional this strategy has been. "The Democratic Convention," their headline read, "was a massive evasion... masking the most Left-wing strategy in years." The only way Joe Biden succeeds, many acknowledge, is by concealing his extremist plan from voters -- which, as we know from his White House years, includes taking a blowtorch to religious freedom.

"Our Founders did not envision a quiet, hidden faith," Cissie insisted. "They fought to ensure that voices of faith were always welcomed... Not bullied." That's been a shared goal of this administration, she pointed out, which has shown an unparalleled commitment to persecuted people everywhere. "On the world stage, President Trumpbecame the first president to talk about the importance of religious liberty at the United Nations, giving hope to people of faith around the world," Cissie said. Minutes later, everyone from NBC News to the AP rushed to declare, "This is false," as they played a non-stop loop of Barack Obama in 2012, delivering a throwaway line about the freedom he spent eight years dismantling.

If the Left wants to quibble over words, fine. But the point is, this administration's leaders didn't just talk about religious freedom. They acted on it. Of course, President Obama acted too -- punishing faith, marginalizing believers, and leaving tens of millions of brothers and sisters suffering silently around the world. The fact that President Trump has freed Christian hostages, appointed an Ambassador-at-Large for Religious Liberty, used its economic leverage to stop persecution and religious genocide, hosted two international Ministerial to Advance Religious Freedom, condemned blasphemy and apostasy laws, denounced China, Iran, Nigeria, and others for their human rights atrocities, launched an International Religious Freedom Alliance, and so much more -- speaks volumes to how much his team cares.

The media needs to stop with its "fact checks" and try a reality check instead. There's no glossing over the truth about these two parties or their agendas. The reason networks can't stand speeches like Cissie's or Nick's or Abby Johnson's is because they show viewers the one thing Democrats don't want voters to see -- a preview of exactly where they'll take America if they have the chance.