Jim Caviezel is making the rounds to talk about his new movie, Infidel, about the persecution and murder of Christians in Iran, which is a box office hit.

But in box office totals we actually have at the moment, Infidel topped The New Mutants on Friday, earning $530,000 in 1,724 theaters. Writer/director Cyrus Nowrasteh’s drama, about a State Department official (Claudia Karvan) who finds little help in official channels where her blogger husband (Jim Caviezel) is kidnapped and tried for espionage in Iran.

In the middle of this interview on Fox News, some kind of holy fire descended on Caviezel and he lit up the screen with an epic soliloquy about the nature of humanity, the duty of a Christian in the face of oppression, and the coming conflict with our fellow citizens who will not stop trying to remove religious and constitutional freedoms. You will not believe this. Someone get this man a pulpit. 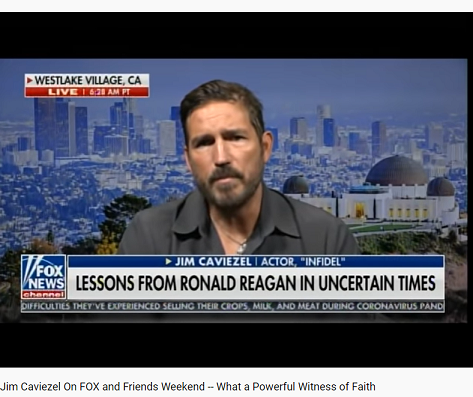 There’s a moment there where Caviezel almost comes out of his chair and something takes over his whole body and what’s rolling effortlessly off his tongue is one of the greatest arguments against the philosophy of appeasement I have ever heard. Has anyone checked Winston Churchill’s grave? Is it empty? What just happened?

Every lesson in history tells us that the greater risk lies in appeasement and this is the specter our well-meaning Christian liberal friends, our priests, bishops, and pastors refuse to face, that their policy of accomodation is appeasement and it gives us no choice between peace and war, only between fight and surrender. If we continue to accomodate, continue to [move] back and retreat we will have to face the final demand, the final ultimatum and what then?…

Voices pleading for peace at any price, or ‘better Red than dead,’ or as one commentator put it he would rather live on his knees than die on his feet and therein lies the road to war because those voices do not speak for the rest of us.

You and I know and do not believe that life is so dear or peace so sweet as to be purchased at the price of chains and slavery. If nothing in life is worth dying for, when did this begin? Just in the face of this enemy? Or should Moses have told the children of Israel to live in slavery under the Pharoh’s? Should Christ have refused the cross?

Should the patriots at Concord Ridge have refused to fire the shot heard around the world? The martyrs of history were not fools and our beloved dead who gave their lives to stop the advance of the Nazis did not die in vain. Where then lies the road to peace? Well, it’s a simple answer after all, that you and I have the courage to tell our enemies, there is a price we will not pay and there is a point beyond which evil must not advance.”

FOR MORE INFORMATION AND ADDITIONAL ARTICLES: