Director of National Intelligence John Ratcliffe on Tuesday declassified documents revealing that former CIA Director John Brennan had briefed former President Obama on Hillary Clinton’s plan to tie then-candidate Donald Trump to Russia — as “a means of distracting the public from her use of a private email server.”

Ratcliffe declassified two items — two pages of Brennan’s handwritten notes — taken after he briefed Obama on intelligence the CIA received, according to Fox News; and a CIA memo that showed that the CIA referred the matter to the FBI for potential further investigation.

Most of Brennan’s handwritten notes are redacted. However, the unredacted portions say: “We’re [gaining] additional insight into Russian activities from [REDACTED].”

“Cite alleged approval by Hillary Clinton [on 26 July] of a proposal from one of her foreign policy advisers to villify [sic] Donald Trump by stirring up a scandal claiming interference by the Russian security services,” he wrote.

An intelligence official said on background about the revelation:

The American people deserve to see how the Obama-Biden White House and their appointees at DOJ and CIA politicized our work, because many of them are trying to regain power now. We just want to keep the American people safe. It’s what we spend every waking hour focusing on. We don’t want to go back to our important work being abused as a political weapon of the Democrats.

The rest of Brennan’s notes appear to be linked to different Obama administration officials — possibly of what they said or wanted follow-up action on.

In the left margin, he wrote “POTUS,” and to the right, he then made three bulleted notes. Two are redacted, but one said: “Any evidence of collaboration between Trump campaign + Russia.”

He then wrote “JC” in the left margin — a likely reference to then-FBI Director James Comey, and took four additional bulleted notes on the right, all of which are redacted.

He drew another line, with no additional name, for one bulleted note that is redacted.

Another line was drawn, and below that in the left margin he wrote “Denis” — likely in reference to then-White House Chief of Staff Denis McDonough, and added one redacted note.

He drew another line, and below it in the left margin wrote “Susan” — likely then-National Security Adviser Susan Rice. To the right, he added five bulleted notes, and put an asterisk by one of the notes. All of the notes are redacted.

Sperry said Clinton gave her approval to Sullivan’s plan on July 26, 2016 — just four days before the FBI opened its probe of the Trump campaign.

a. [Redacted] An exchange [redacted] discussing US presidential candidate Hillary Clinton’s approval of a plan concerning US presidential candidate Donald Trump and Russian hackers hampering US elections as a means of distracting the public from her use of a private email server. [Redacted] According to open sources, Guccifer 2.0 is an individual or group of hackers whm US officials believe is tied to Russian intelligence services. Also per open sources, Guccifer 2.0 claimed credit for hacking the Democratic National Committee (DNC) this year.

The CIA likely referred the matter to the FBI since it was related to its ongoing Crossfire Hurricane investigation and only the FBI can conduct domestic investigations. Last week, Comey testified to the Senate that he did not remember any such information, despite him overseeing the investigation.

There is no evidence that the FBI ever investigated Clinton for any such proposal, nor were any members of Congress informed of the intelligence obtained by the CIA.

House Judiciary Committee Ranking Member Jim Jordan (R-OH) tweeted Tuesday: “We now know that John Brennan and Hillary Clinton conjured up the phony Russian hoax with the Obama/Biden Administration to distract Americans from the Clinton email scandal. The witch hunt was worse than we ever thought!” 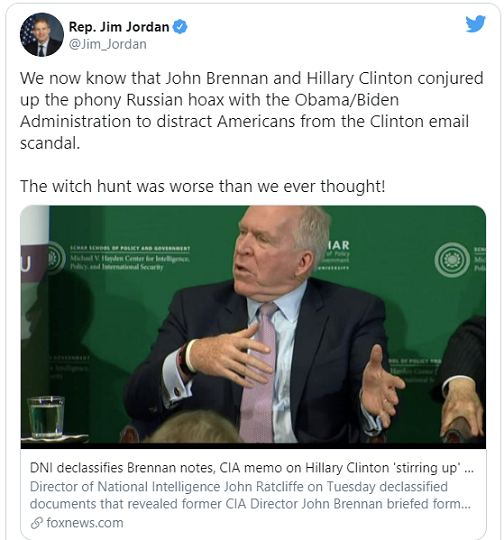 Rep. Doug Collins (R-GA) tweeted: “BREAKING: Brennan’s handwritten notes prove he briefed Obama on Hillary Clinton’s “approved” plan to “vilify Donald Trump by stirring up” the Russian collusion hoax. Yes, there was coup to take down @realDonaldTrump. And it was even worse than we thought!” 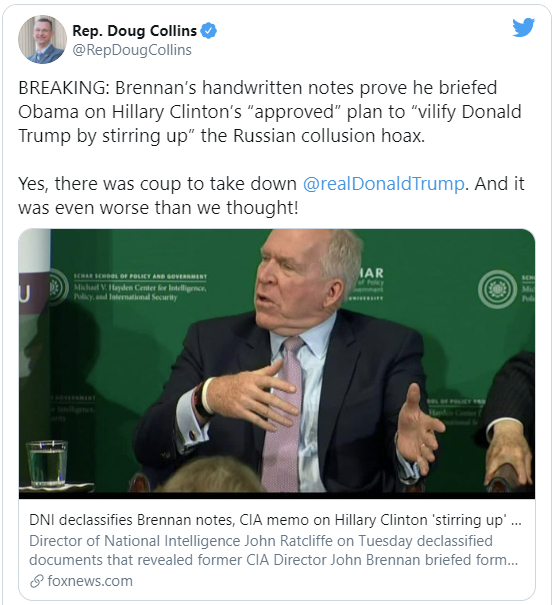 Former Acting DNI Richard Grenell tweeted that the declassified documents were proof that Obama and then-Vice President Joe Biden directed their administration to use the powers of government to attack Trump’s campaign and then transition.

“The Susan Rice email to herself after the Oval Office meeting was part of a coverup,” he tweeted, in reference to a January 24, 2017, email Rice emailed herself about a January 5, 2017, Oval Office meeting where participants, including Obama and Biden, were briefed by Comey on its investigations into Trump campaign members. Rice had heavily stressed in her email to herself that the investigations were “by the book.” 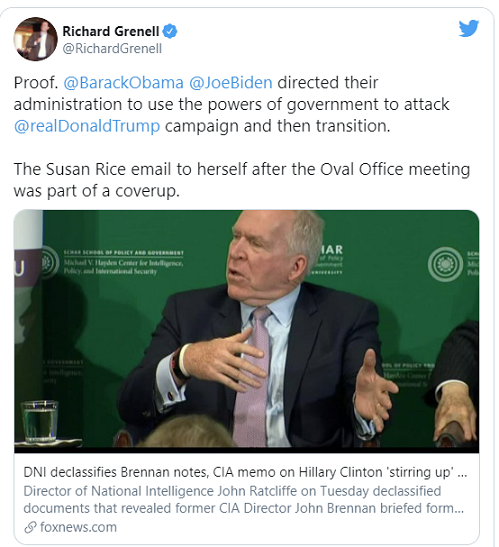 Ryan Fournier, founder and co-chair of Students for Trump, tweeted: “BREAKING: Newly declassified notes show Obama knew of Hillary’s plan to tie Trump to Russia… “As a means of distracting the public from her use of a private email server.” Obama was briefed on this by Former CIA Director John Brennan in 2016. THIS IS HUGE.” 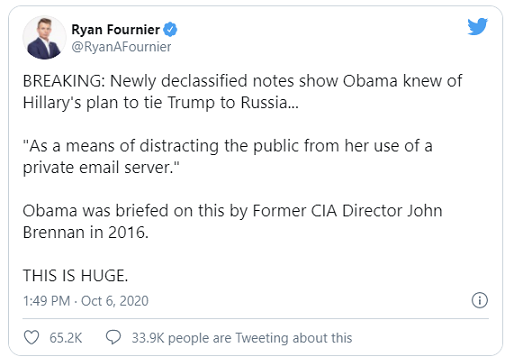 Don Trump Jr., the president’s son, tweeted: “The people who turned the intelligence community & our justice system into a weapon against @realDonaldTrump in 2016 are the same people trying to regain power now. They want Power for themselves. Trump wants Prosperity for all Americans. VOTE!!!” 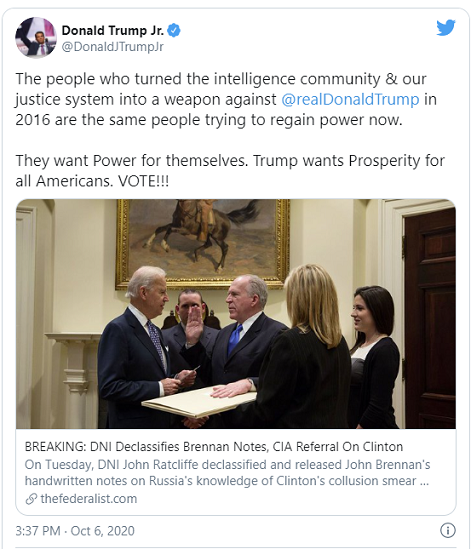 White House Press Secretary Kayleigh McEnany tweeted: “CROOKED Hillary denied our country a peaceful transition of power. SHE concocted the Russia hoax! Brennan briefed Obama on Clinton’s ‘plan’ to tie @realDonaldTrump to Russia as ‘a means of distracting the public from her use of a private email server.'”