A private Christian school in West Tennessee has triggered LGBTQ activists as well as Shelby County Commissioner Tami Sawyer into an angry frenzy.

Officials at Briarcrest Christian School, in Eads, held a training session for parents and students about how to respond Biblically to gender theory. A flyer for the event, which school officials held November 9, asked participants to “look into the craziness our culture is throwing at our kids.”

“When Superman is rewritten to be a homosexual, when parents allow children to choose their genders, and some schools are embracing students for being courageous and ‘coming out’ and considering transitioning…how do you respond Biblically?”

Sawyer, upon seeing the flyer, tweeted about the event and expressed strong disapproval.

“There has to be a reckoning with these institutions on the oppression they uphold and the gates they keep. @BriarcrestHs once educated their students that segregation was God’s will and is now spreading this hateful drivel against LGBTQ children. Just be better,” Sawyer wrote. 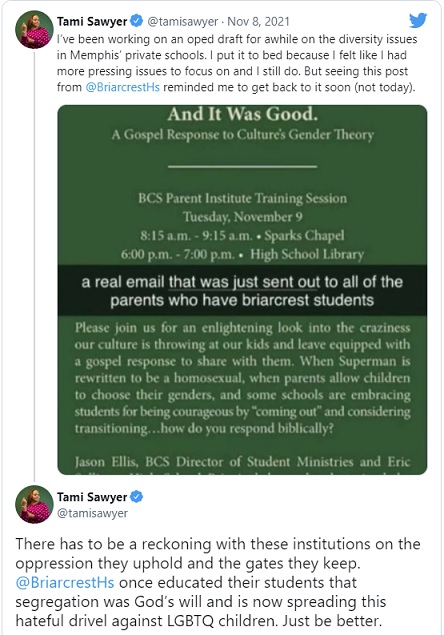 Sawyer then tweeted that Briarcrest, as well as St. Mary’s Episcopal School in Memphis “have some deep internal work to do.”

Sawyer did not return The Tennessee Star’s request for comment.

LGBTQ activist Dylan Sandifer denounced the school during an interview with the Memphis-based WREG last week.

“To promote these kind of bigoted ideas just have no place in school. I understand that as a private school they can teach anything that they want, but that doesn’t mean that it’s right,” Sandifer reportedly said.

Briarcrest spokeswoman Beth Rooks did not answer The Star’s questions Tuesday and instead emailed a statement.

“Briarcrest is a Christian School that teaches and upholds the biblical principles found in scripture. We affirm our unity in Christ and that we are all created equal in God’s eyes. We will continue to strive to teach our students what is true and just in light of God’s word. We love people enough to tell them the truth about biblical sexuality,” Rooks wrote.

“We have a responsibility to teach students about all aspects of biblical truth, including biblical sexuality. In addition, we strive to support parents in their efforts to raise biblically literate children who learn to defend their beliefs with gentleness and respect. Furthermore, as our culture attempts to silence biblical truth, we will proclaim the hope of the Gospel.”

FOR MORN INFORMATION AND ADDITIONAL ARTICLES