Activists from Rise Up 4 Abortion Rights proceeded to Barrett’s home to protest the potential reversal of the 1973 decision in Roe v. Wade. A video posted to Twitter by the group shows protesters with their hands taped to baby dolls and their crotches covered in what appears to be fake blood. 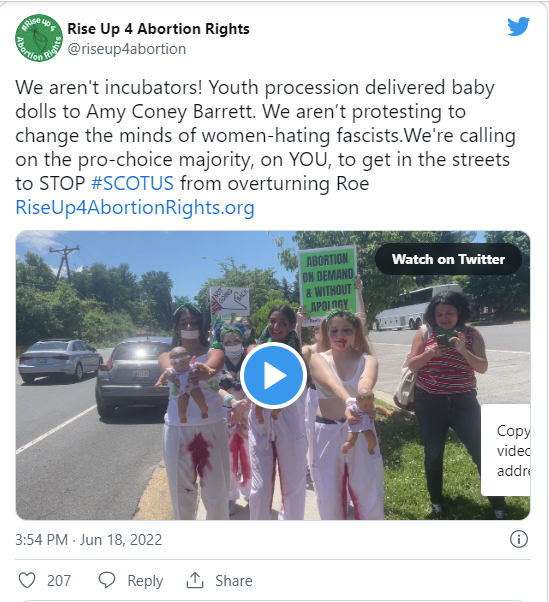 Some held signs with slogans including “abortion on demand and without apology,” according to Fox News, while one sign had a picture of a coat hanger and the words “not going back,” the New York Post reported.

The latest protest comes weeks after the leak of a draft opinion indicating the Court is poised to overturn Roe v. Wade. A separate group of protesters gathered outside the home of Justice Brett Kavanaugh on June 8, less than a day after authorities charged a man with attempted murder after he appeared near Kavanaugh’s home with a handgun.

President Biden signed a bill on Thursday that allows families of Supreme Court justices to receive security, if approved by the Marshal of the Supreme Court. The House passed the bill on Wednesday after weeks of delays.