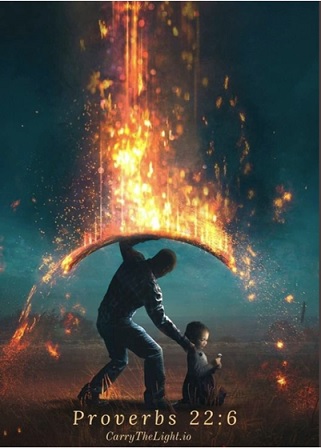 Tip of the hat to Cathy Edwards Covington

Don’t feel sorry for or fear for your kids/grandkids because the world they are going to grow up in is not what it used to be.

God created them and called them for the exact moment in time that they’re in. Their life wasn’t a coincidence or an accident.

Raise them up to know the power they walk in as children of God.

Train them up in the authority of His Word.

Teach them to walk in faith knowing that God is in control.

Empower them to know they can change the world.

Don’t teach them to be fearful and disheartened by the state of the world but hopeful that they can do something about it.

Every person in all of history has been placed in the time that they were in because of God’s sovereign plan.

He knew Daniel could handle the lions den.

He knew David could handle Goliath.

He knew Esther could handle Haman.

He knew Peter could handle persecution.

He knows that your child can handle whatever challenge they face in their life. He created them specifically for it!

Don’t be scared for your children, but be honored that God chose YOU to parent the generation that is facing the biggest challenges of our lifetime.

Rise up to the challenge.

God isn’t scratching His head wondering what He’s going to do with this mess of a world.

He has an army He’s raising up to drive back the darkness and make Him known all over the earth.

Don’t let your fear steal the greatness God placed in them. I know it’s hard to imagine them as anything besides our sweet little babies, and we just want to protect them from anything that could ever be hard on them, but they were born for such a time as this.