Rep.Bob Ramsey was back at the Capitol this week sporting that typical rotator cuff surgery brace and is on the mend. Speaker Casada swore him in as he missed the Organizational Week when all the other lawmakers were sworn in. Please pray for Bob and for the legislature in general, who will be back in full force next week.

SPECIAL DAY: The inauguration of the 50th Governor of Tennessee, Bill Lee, was held last Saturday in the War Memorial Building. If you missed the lovely ceremony, you can watch the entire event HERE. Then the General Assembly recessed in order for the offices to be moved around to accommodate the new committee assignments.


NOTES:  Normally the recess is for either one week or two weeks, which both houses observe.  However, this time the Senate recessed for two weeks and the house recessed for one week and came back for a couple of days this week. Some of the committee chairmen were at the Cordell Hull building for some training on Tuesday but the House wasn't in session.  The House was in session when they had very brief floor sessions on Wednesday and Thursday. We used this time to continue to meet some of the new folks and say hello to the returning legislators. Also, on Wednesday my friend,Chris Holton, was here from Louisiana to visit some legislators about a bill we are working on. Next week both chambers will be back in full swing and we will start reviewing bills


HALEY'S CORNER:  Since the legislature was not in session on Tuesday, I suggested that Haley not make that long drive from near Knoxville. She will be back next week.

JAIME'S CORNER:
The gavel hit the hardwood, and my second week at the capitol began. One of the first orders of business was brought forward by majority leader, William Lamberth. He suspended the rules and asked for HR3 to be heard. It was a resolution to honor the legacy of Dr. Martin Luther King Jr. Normally, resolutions will be passed without reading more than just the title of the piece, but Representative Lamberth asked for the entire resolution to be read. Silence fell upon the assembly as the memorial was said aloud. The document ended with a commission, “Join with Tennesseans throughout this great state to continue the fight against racism of all types as we all work to bring Dr. King's dream to fruition by making Tennessee a place where equality, justice, freedom, and peace continue to grow and flourish.” This moment really stood out to me, not simply because Dr. King is one of my personal heroes, but because it was a good mission statement for our legislator to begin the year.
After the floor session, Mrs. Bobbie and I started towards our own mission for the day. We met with many representatives, and even introduced ourselves to some of the new legislators. I was very happy to meet with my own representative, Charlie Baum, and I am very glad I have an intelligent, grounded person to speak for my district’s values. Although this session is just getting off the ground, I am very excited to see what happens with our bills and to learn more about my government.

died unexpectedly less than a month prior to the August state legislative primaries. He was

running unopposed in the Republican primary for a seventh term.  Outgoing Shelby County Register, Tom Leatherwood became the Republican nominee for that House seat election, which he with over 70% of the vote. Now here is the interesting part.  Tom served as a State Senator from 1992-2000, during which we became great friends.  Fast forward:  When I was in his office on Wednesday, proudly displayed on the wall of his house office wall was the National Eagle Award, signed by our founder, Phyllis Schlafly, that we presented to him for outstanding work when he was in the Senate. Needless to say, I was very impressed and grateful.

One other note of interest:  The perfectly lovely, underground tunnel from the State Capitol to the Cordell Hull office building has a new name: 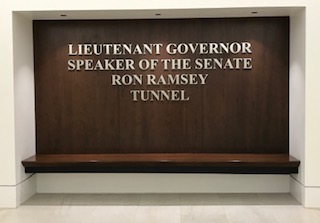 MEMPHIS, Tenn. — District 32 voters headed to the polls Thursday to decide who will move forward in the race to fill a state Senate seat left empty by prominent Collierville Republican Mark Norris.

He tweeted, “I’ve said that rural TN is one of my top priorities. Today I’m pleased to announce Executive Order No. 1, which begins to address improving the outlook in those areas by calling on our departments to assess their impact on the rural parts of our state.”

On Monday, Governor Bill Lee attended an event honoring the legacy of Dr. Martin Luther King Jr. I know how hard it was for Gov. Lee to do what he did when the keynote speaker gave his address. In my eyes, he passed his first hard policy test as governor. And Dr. King might have understood the true nature of the test he passed.

It is really hard for a politician to attend an event at which there is a good chance his or her policy views will not be welcome, and harder still to stick to them when they are put to the test at the event.

I know from experience. I vocally supported school vouchers during my Republican primary race for state Senate. Soon after I was elected senator, I was asked to attend a Parent Teacher Association meeting in my district. I knew that PTAs did not support vouchers, but I went because I represented the people that were there. Sure enough, I was asked about my position on vouchers. I gave the same answer I gave on the campaign trail.