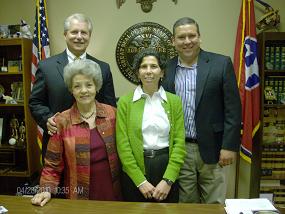 To Senator Bill Ketron (R-Murfreesboro),
Rep. Gerald McCormick (R-Chattanooga),
and Joanne Bregman we
express our deep appreciation
for all they did to assure the
success of this important legislation.

Many thanks to everyone who participated in this great victory!!!

Allows Tennessee courts to NOT enforce libel defamation judgments of foreign courts if:

Grants Tennessee courts personal jurisdiction over the obtainer of a foreign defamation judgment when the defendant:

o        is a person or entity over which the state could have jurisdiction, or,

Written defamation of a person typically injuring their reputation or character.

What is "libel tourism?

Libel tourism describes a practice whereby (usually) foreign plaintiffs file or threaten to file libel suits in jurisdictions where libel laws are more plaintiff-friendly than those in the United States where there is greater protection for freedom of speech.

Because of the extraordinarily high cost of litigating a libel suit overseas, American authors or publishers if sued, are forced to choose between settling the suit or taking a default judgment (which the foreign plaintiff may later seek to enforce in the US).

This results in suppressing rights granted by the 1st Amendment and creating a chilling effect on speech. Libel tourism is especially threatening for any US journalist, author and publisher "whose work implicates foreign nationals in sensitive subjects such as terror financing.

Why is the "libel tourism law sometimes referred to as "Rachel's law?

"Rachel's law refers to the recent case of Ehrenfeld v. Mahfouz, involving the publication of Rachel Ehrenfeld's book "Funding Evil: How Terrorism is Financed “and How to Stop It. Even though her book was not published abroad, and only 23 copies of her book were sold in the UK via the internet, she was sued for libel in London by a billionaire Saudi banker named in her book. She claimed that this man and his family had provided financial support to Islamic terrorist groups.

While the alleged libel may not have been actionable under US libel law, the UK court held that it had jurisdiction to hear the case. A default judgment against Ehrenfeld resulted.

Ehrenfeld initiated an action in a US court to hold the UK judgment unenforceable under the US and New York Constitutions. In the absence of the eventual legislation known as "Rachel's Law, the New York court had no jurisdictional basis to rule on the claim.