It is now being projected that the second year of the 110th TN General Assembly will adjourn Sine Die on Tuesday (maybe Wednesday).  We call this the 'crazy' time and there is STILL a lot of work to be accomplished and decisions to be made that you and I have to live with, so please continue to pray for our lawmakers.

JONATHAN'S CORNER:
The legislature has been slowing down in recent weeks. Unfortunately, we have had to keep working on our bills. Today began with waiting to speak to the Finance Committee chairman about discussion on the sanctuary city bill. The consensus was the discussion should be limited. We then met with Senator Green about conforming the house and senate versions of our bills. Before sitting in on the finance committee, we solicited support from that committee's members, most of whom were receptive. I also discovered that committees, bills, and schedules are unpredictable this time of year. We watched debate on the senate floor after lunch, and they adjourned after only an hour of discussion.

LUKE'S CORNER:
As the last few weeks of the internship come you start to look back and see all that you've learned. I've learned so much from Mrs. Bobbie and all the experiences at the capital. As our bills move from committees to the final stages you see just how much work Mrs. Bobbie has put into the bills and it is extremely admirable. The more you learn about the process of getting bills passed the more exciting committees become.  This internship has in one of the most exciting experiences of my life.

LAURABETH'S CORNER:
The session is winding down! There's talk of the legislature closing on Tuesday, but it doesn't quite seem like that will be the case; At least, I hope it's not! There were a lot of bills in Finance, Ways & Means and Behind Budget, many of which were skipped over due to an inability to fund.  This late in session, committee and floor meetings begin to overlap, and it's hard to find legislators in their offices! It's been a crazy year due to the new building, the new offices, the new meeting rooms; and it only doubles the stress and confusion that happens this late in the session. Maybe it'll be better next session, but with election season coming up and a good number of representatives and senators giving up their seats, I'm not too hopeful. Though Wednesday was certainly as interesting and nerve-wracking as any other, when the time comes, I think the person who is going to miss this session (and the new building) the most is me!


PLEASE HANG WITH US FOR ONE MORE WEEK:

Both our Anti-Sanctuary City Bill and our Municipal ID Bill are still in motion.  As mentioned above, this is the 'crazy' time and 'things happen'. What MUST not happen is that either of these bills get left behind.  They are TOO IMPORTANT to the SAFETY of Tennesseans for that.

Contacts STILL NEED TO BE MADE, so please be a participant in YOUR government.

In case you missed these:

This has been the MOST DIFFICULT piece of legislation I have EVER worked on, which I think demonstrates how important it is to get is passed.

STATUS:  This is the present language we are working with. SB2332 will be on the Senate floor probably Tuesday. HB2315 is in House Finance on Monday, then it should move directly to Calendar and Rules and hopefully on the House Floor Tuesday.
ACTION: PLEASE make sure that the Senators and House members KNOW that you support this legislation and that you want them to vote FOR it.

NO MUNICIPAL IDs:
SB 2333 by *Green, Bell, HB 2312 by *Lamberth, Casada, Hill M, Holt
Public Officials - As introduced, prohibits the use of consular identification cards, and other similar documents not authorized by the general assembly for use for identification purposes, for determining a person's identity or residency by an official or employee of the state or any political subdivision of the state; prohibits local governments and law enforcement agencies from establishing the acceptability of any such cards or documents.

This bill establishes that any local identity card program would have to be authorized by the General Assembly.  Local governments and law enforcement are prohibited from relying on documents not sanctioned by the General Assembly to establish a person’s identity. Locally issued identification cards benefit illegal aliens by enabling them to reside in the jurisdiction under an impression of lawful presence. Every candidate for Mayor of Nashville in the last election cycle stated that they SUPPORTED these Municipal ID cards

STATUS: This is the present language. As you recall from last week, Praise the Lord, as amended, HB2312 passed the house 72-23-1!! SB2333 is scheduled on the Senate floor Monday evening.
ACTION: Please contact the Senators and urge them to vote YES!


THE LEGISLATORS HEARD FROM THE PUBILC:
Tennessee General Assembly Passes Bill to ‘Hold Harmless’ Students and Teachers Over This Year’s TNReady Tests .
This is the Conference Committee Report that was adopted, Ayes 24, Nays 1 in the Senate and passed the House Ayes 84, Nays 1.


'Defund Planned Parenthood' law struck down in Ohio is similar to Tennessee's .


IN CASE YOU ARE INTERESTED:
Candidates for Governor, US Senate and US House

Candidates for the TN Senate and the TN House 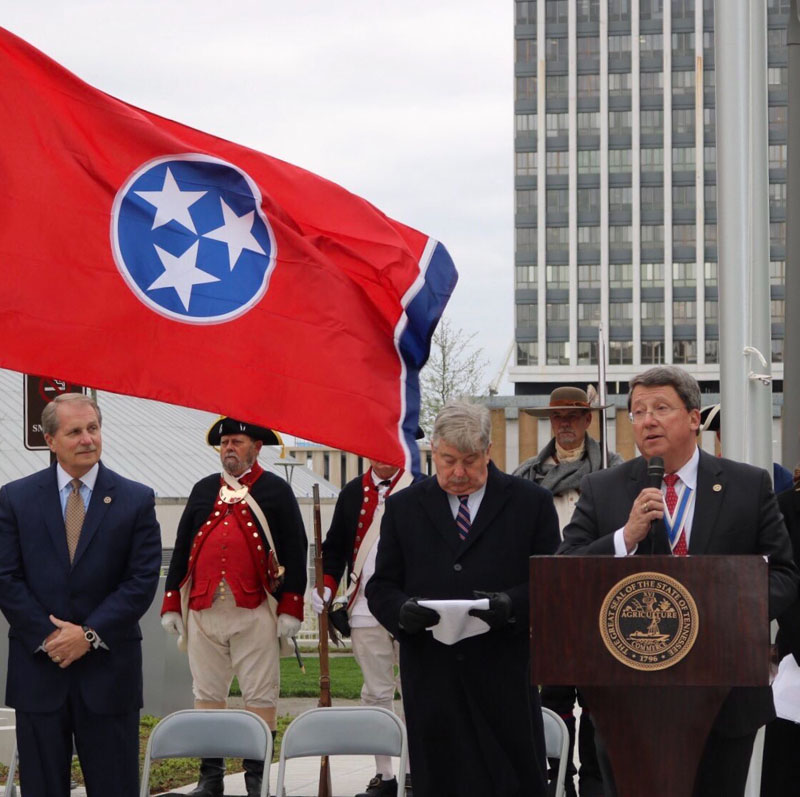 Dedication of the new Plaza next to the Cordell Hull Building, the new home of the General Assembly