Some of the legislators are dealing with colds and viruses, so please remember them. Please continue to remember Rep. Mary Littleton as she looks forward to getting her hip replacement surgery. As I have mentioned before, the start of the session has been strange. I don't know if it was the move the Cordell Hull that has interrupted the 'natural flow' of things, but it has been more like the first year of a session than the second when things usually start moving pretty fast. This has been more like 'molasses in January'. Again it raises concerns that when things begin to move it could be so fast that bills may not get the attention they really need. We shall see.  By the numbers: In first 3 weeks, Tennessee legislature passes 1 bill as leaders urge swifter action.

JONATHAN'S CORNER:
This week Mrs. Patray was collecting signatures for her bills. We went up and down the elevator and stairs a lot. The afternoon was spent watching committee meetings. That was my highlight of the day. It was fascinating watching the legslature discuss the presented bills.

LUKE'S CORNER:
The internship this week consisted more of Mrs. Bobbie getting several people to co-sign on to her bills. We went to two committees one in the house and one in the Senate where they reviewed a few bills, some interesting and I'm not going to lie, some are hard to keep your eyes open during. Except for that, this week was very informative and I learned a lot about how the government works.

LAURABETH'S CORNER:
The most interesting part of this day had to have been the committee meetings. Mrs. Bobbie and I sat in on three meetings, one with the senate and two with the house, and at our last meeting of the day we got to see HB0108, the fetal heartbeat bill, as amended (see below), pass on to the Health committee. The senate committee meeting we sat in on involved birth control, and we also sat in on a press conference about abortion; It was almost as if the topic had been chosen as the theme of the day! Earlier I got to meet the representative for Rutherford County (My county!) Tim Rudd, and learned about his gift card bill, which involves the charge you recieve for every month of inactivity. The day almost felt a little bit slower than last week, but I'm not complaining! I loved meeting and talking to everyone, and with Mrs. Bobbie there to guide me, I'm sure I'll get the hang of this place soon enough! 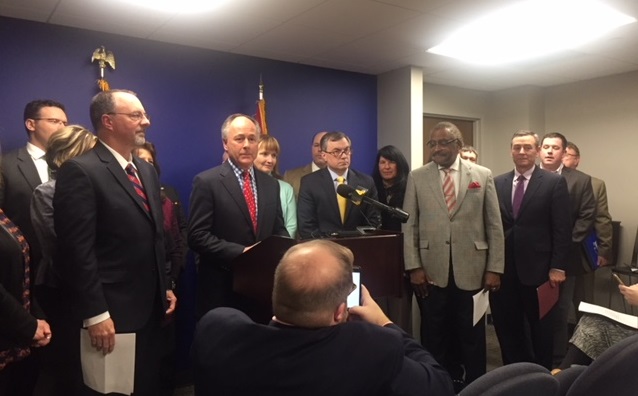 THE BIG NEWS OF THE WEEK: REALLY UNFUNDING PLANNED PARENTHOOD:

SB 2148 by *Bell, Gardenhire, Bowling, Hensley, Haile, Bailey, Southerland, Jackson, Pody, Niceley, Yager, Ketron, Stevens, Swann, Watson, Gresham, Crowe, Green, Johnson, Kelsey, Roberts, Briggs, Lundberg, Massey
HB 2251 by *Matlock, Harwell, Gant, Hill T, Moody, Crawford, Byrd, Carr , Rogers, Keisling, Sexton J, Boyd, Tillis, Zachary, Lynn, Eldridge, Rudd, Terry, Weaver, Whitson, Vaughan, White D, Lamberth
TennCare - As introduced, establishes that it is the policy of the state to avoid the use of state funds to promote or support elective abortions; instructs the commissioner of finance and administration to seek a waiver from the federal centers for medicare and medicaid services to require the exclusion of a provider from the TennCare program if inclusion of the provider in the program would result in the direct or indirect use of state funds to promote or support abortion.

NASHVILLE — State Senator Mike Bell (R-Riceville) announced today that he has filed legislation directing TennCare officials to seek a Medicaid waiver to exclude facilities in Tennessee that perform elective abortions from receiving taxpayer money.  The announcement was made today at a press conference with House sponsor Rep. Jimmy Matlock (R-Lenoir City) and numerous co-sponsors of the bill.
“Tennesseans do not want their hard-earned tax dollars going to abortion clinics,” said Senator Bell.  “Allowing our tax dollars to go to abortion clinics, even though they supposedly are not used directly for abortions, helps pay for their operational costs.  This is a practice known as cost-shifting and the practical effect is that it keeps clinics that perform elective abortions afloat at taxpayer expense.”
The Department of Finance and Administration estimates abortion providers have received almost $1 million in taxpayer funding from 2012-2017.
Bell said under the administration of President Obama, states could not get waivers to exclude abortion providers, but he believes that this could change with President Donald Trump’s administration.

NOTE: Rep. Van Huss has been working on this legislation since January 2017.  As amended on Wednesday, he finally got if out of the House Health Subcommittee on Wednesday. In a powerful testimony, acknowledging that the original language did not have enough support to pass and responding to the amended language as well as questioning by some of the committee members, Rep. Van Huss stated that he will never stop fighting for the lives of babies.
AS AMENDED:
The bill is now more of a reporting/data collection bill.  It requires that if a ultrasound was performed, the Dept of Health shall report the type of abortion done, note that the mother was offered the opportunity to view the ultrasound and inform the mother of the presence or absence of a fetal heartbeat and document that the patient has been informed.
STATUS:  HB108 was passed on a voice vote and will be heard in the House Health Committee on Tuesday.
ACTION: If you click on the Committee members, you will see that many of them have signed on as co-sponsors; you will want to contact those who have not and urge them to vote for HB108 as amended.