The Second session of the 110th General Assembly, the members and their staff really do need your prayers this year. the move to Cordell Hull has been accomplished now but everyone has to get used to the new facility, new schedule, new demands, etc.  In addition, the massive 2018 election cycle is on the horizon and there will be a great push to get out as soon as possible in order raise money and campaign. It is very important that in this haste, proper attention is given to the various pieces of legislation so that they are carefully and properly considered. Also, please pray for the lawmakers' families as they are away from home, family, and jobs to take care of the state's business. 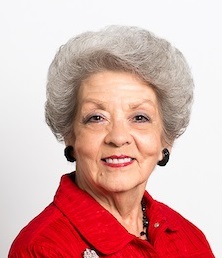 PERSONAL NOTE:
Well here we are again, starting my 31st year at the Capitol.  That truly is hard to believe.   Who would have thought when I showed up at the Plaza in early 1987, that I would still be here in 2018.  Honestly, I never gave it a thought -  I just kept putting one foot in front of the other. Candidly, this year has gotten off to a shaky start for several reasons. I had surgery on both my feet on Dec 15 and before I was out of surgical shoes, my husband Ron had to be rushed to Vanderbilt where he was once again in the Cardiac unit with severe congestive heart failure for a week.  He is home now, but certainly not well at all with lots of doctor appointments ahead.  So we would appreciate your prayers for him. 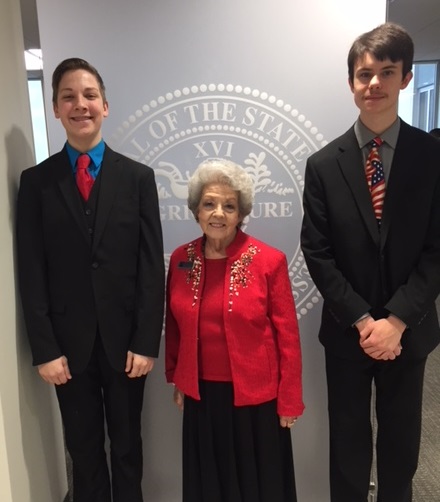 One of the most fun things about what I do is getting to spend time with incredible young people.  This year is no exception. You will enjoy getting to know the two great young men who will be with me on Tuesdays. (I may have a young lady with me on Wednesdays if we can get that worked out this coming week.) Introducing Luke Turnage (his sister was my intern in 2016) and Jonathan Helton. This is the second time I have had siblings of former interns - we must be doing something right!

INTRODUCING LUKE TURNAGE:
Hello, I am Luke Turnage and I am a sophomore at H.P.A. which is a home school tutorial group.  I am 16 years old and I am in the BSA (Boy Scouts of America), currently a life scout working toward Eagle. I have been with the Teen Eagles for two years now and have shadowed a Representative in the past.  Along with that and a few of my friend's experiences with an internship and their high regard of Miss Bobbie,  I decided to do it as well.

LUKE'S CORNER:
My first day of the internship was not what I expected. The first day I thought would be a breeze but it was anything  but. Through out the day I could tell that not very many people knew exactly where things where or who to ask. As we went through the day we slowly but surely got a lay of the land. Soon enough we found that being in this new building would make it much harder to get around. I am confident that by the end of the session we will have it down even if it is difficult to get where you are going, we can still get the job done with perseverance.

INTRODUCING JONATHAN HELTON:
Jonathan Helton is a senior and an avid debater. He spends most of his free time researching federal transportation policy, and going to speech & debate tournaments all over the southeast. He is the oldest of three, and lives in Clarksville. He enjoys SEC football. This internship has already given Jonathan a glimpse into the practical inner workings of our government - something he hopes to get into one day.


JONATHAN'S CORNER:
I think that Mrs. Patray introduced me to more people than I ever have been introduced to in one day. We explored the new building, and the general consensus was that the old Legislative Plaza was superior. Nearly everyone we met said that Mrs. Patray was one of the best people in the Capitol. It was an awesome first day.

On Tuesday, the U.S Court of Appeals for the 6th Circuit upheld the vote of the people in 2014 in favor of Amendment 1 to the Tennessee Constitution. The amendment essentially reversed a decision by the Tennessee Supreme Court in 2000, holding that abortion was a “right” under our Tennessee Constitution. The 6th Circuit’s opinion was not just a legal version of a WWE SmackDown to the pro-abortion plaintiffs and the federal district judge who agreed with them, but it was a reminder to me about how to think of another issue on which I’m working.

YOU'RE INVITED!  KEEP THE FAITH IN AMERICA EVENT!
You are invited to join us for the KICK OFF EVENT of Keep Faith In America. A ceremony, led by our TN State Legislators, will be held in the Old Supreme Court Chambers at the TN State Capitol on Tuesday, January 16, 2018 at 9:00 a.m.
Tennessee will be part of a first-of-its-kind national broadcast on Facebook Live hosted by federal and state elected leaders. Legislators in congress and in over 30 states will be participating in “Keep Faith in America” events at their capitols.
The focus of the event in the TN State Capitol will be to present a unifying and winsome message about the positive impact of faith, the role of faith in freedom and civility, and the need for unceasing prayer for our leaders and nation.
We are honored to have our very own Irlene Mandrell at the ceremony. Irlene is a gifted musician and a Country Music Hall Of Fame Walkway of Stars inductee. Even more admirable than her illustrious career is Irlene's desire to dedicate her platform to elevating a message for our nation. Her latest debut solo album Thanks To You promotes a rejuvenation of national unity and respect for our heroes through her songs.
This event is just the beginning of a strategy created by a unique coalition of faith leaders who will continue to focus on impacting other key spheres of society including churches, universities, local government and school boards.
I Stand For Faith,  Marlene Tidwell, State Director, Tennessee Prayer Caucus Network

ARTICLE V CONVENTION FOR TERM LIMITS:
SJR 0092 by *Jackson , Harris
Constitutional Conventions - Makes application to Congress for the purpose of calling a constitutional convention for proposing a congressional term limit amendment
STATUS: SJR92 was on the Senate Floor on May 9, 2017, when it was officially reset on the first calendar of 2018.  Well sure enough, it was first up on the Senate floor Calendar Tuesday, where, thankfully, it was sent back to the Calendar Committee. In today's political climate, 'term limits' may seem like a quick fix solution, but it certainly is not.  It would become a 'lame duck' boondoggle. For more information go HERE. Hopefully we have seen the last of this idea as later conversations with other senators indicated no real support for the proposition, BUT, we will remain vigilant.

DRIVER'S LICENSES FOR NON-CITIZENS:
SB272 by Bowling, HB222 by Ragan

Driver Licenses - As introduced, requires the department of safety to print the language "NON U.S. CITIZEN" or "ALIEN" on driver licenses, permits, or other forms of identification issued or renewed for a temporary period to persons who are not United States citizens and not lawful permanent residents of the United States. - Amends TCA Title 55, Chapter 50
STATUS:  On Feb 27, 2017, SB272 passed Senate Transportation and Safety Committee 6-1; then was referred to Sen. Finance Ways and Means.  HB222 is scheduled for House Finance, Ways and Means Subcommittee on Wednesday.
ACTION: Please go HERE and sent the members emails encouraging them to vote YES on this important bill.

CONSTITUTIONAL AMENDMENT TO PERMIT CASINOS:
HJR 0109 by *Miller, Akbari, Staples, Hardaway, Camper, Powell, Towns
Constitutional Amendments - Proposes amendment to Article XI, Section 5 to allow the legislature to authorize casinos and games of chance associated with casinos to be operated in Tennessee.
STATUS: This resolution was put on notice several times in the State Government Subcommittee last year but was, thankfully, never brought to a vote. We DO NOT need to change our Constitution to permit even more gambling in TN.
ACTION:  Please go HERE, contact the committee members, and urge them to vote NO on HJR109.